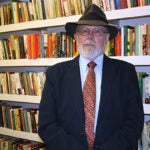 Crammed into a corner made by padded walls, hunched under a low tin ceiling, Max Roach smacked and rattled the drums while his feet rapidly tapped the pedals of the kick and hi-hat. A photographer captured the scene, at the Three Deuces, one of many small jazz clubs on New York’s 52nd Street in the 1940s.

Seventy years later, Matt Moran discovered the photo and was so struck by it that he created a replica of the Three Deuces stage that now sits inside Harvard’s Ethelbert Cooper Gallery of African American Art. Next to the drum kit is a specially computerized Steinway piano that plays, once an hour, original music by Moran, a contemporary jazz pianist.

That stage is just one of several mixed-media installations amid more than 70 paintings, photographs, artifacts, and collages featured in “The Art of Jazz: Form/Performance/Notes,” at the Cooper Gallery on Mount Auburn Street. Held in conjunction with the Harvard Art Museums, the exhibit explores the interaction between jazz and the visual arts.

There are 1960s jazz album covers painted by Andy Warhol and Romare Bearden. There’s a blues anthology by W.C. Handy with modernist illustrations by Miguel Covarrubias. A collection of Hugh Bell photographs depict a vulnerable Billie Holiday in one of her last singing performances, while Ming Davis photos show anonymous jazz musicians and urban street scenes in the 1980s.

Arranged carefully in conversation with one another, said co-curator and gallery director Vera Grant, the works show “jazz as an improvisational and innovative art form” growing alongside modern visual art, from Harlem Renaissance days through the present.

A significant section of the exhibit on display at the Harvard Art Museums features paintings by Jackson Pollock. “We know he listened to jazz all the time while he was doing drip painting,” said co-curator David Bindman, who assembled the collection with Harvard art history colleague Suzanne Preston Blier.

In a parallel with improvisational jazz, Pollock’s spills and splotches of color often evoke a dismissive “anybody could do that” response, suggested Grant, which belies the discipline and planning that went into his work. “Pollock had been thinking about it, preparing, before he exploded onto the canvas.”

Jazz artists, too, for all the “wild abandon” and spontaneity that strike listeners, said Moran, are quite disciplined. Behind the live performance is a lifetime of practicing and honing an inherited structure. And just as in a modern collage or painting, Moran says, there’s an intricacy and care, if you pay attention to the notes. “For me, the delicacy of Whitfield [Lovell]’s drawings is the delicacy of how Charlie Parker or Billie Holiday perform a song.”

What sets the Cooper exhibition apart is its audio. Visitors hear jazz from disparate sources as they walk through the gallery, which is part of the Hutchins Center for African and African American Research. There’s Moran’s piano, filling the space with music once an hour. In Lovell’s “After an Afternoon,” a stack of vintage radios play Holiday songs and other old broadcasts. SoundTube speakers play Count Basie and other selections from the album covers display.

Sounds you’ve never heard emanate from “Echo in the Bones.” This remarkable mixed-media installation by Christopher Myers includes music arranged by Moran, interpolating a Mississippi John Hurt song with a traditional Vietnamese tune. Myers found similarities in the funeral marches of New Orleans and Saigon. He built chimerical, twisting, multi-horned instruments out of discarded tubas and trumpets. A marching band uniform Myers designed has digits stitched on the back: the numbers of dead after Hurricane Katrina.

The photo that inspired the Three Deuces installation — that of Roach, the legendary drummer — resonated with Moran, the modern-day pianist, because it was a snapshot of jazz at a temporal crossroads. The genre had downsized from its 1930s big band heyday, when orchestras played “architectural” arrangements in cavernous ballrooms, said Moran.

In the 1940s, in small clubs like the Three Deuces, the musicians were “shoved in a corner, where the music gets truncated,” Moran said, “as if to dampen the effect.” And yet, as the acts got smaller, “The music became wilder. . . five band members who are moving independently of one another.” That new looseness begat be-bop. This was a more strident yet more developed expression of African-American culture. Faster, note-based, often dissonant, be-bop challenged mainstream ears.

Later, Roach challenged — or rather confronted — mainstream America more directly, with his pro–Civil Rights album “We Insist! Max Roach’s Freedom Now Suite” in 1960. Moran said, “It’s almost like what happens within jazz music [in the ’40s] becomes the breaking point of 15 years later,” when not only black musicians but African Americans generally announced: “‘We can’t take it anymore.’”

But though the photograph that inspired his installation was of a moment frozen in time, Moran says jazz is anything but. “We tend to think jazz is this thing that’s in black and white, and it happened a long time ago.” In fact, the music lives on in its myriad forms, not only in the hands of devoted jazz musicians such as Wynton Marsalis, but also as a fresh form for experimentation by popular rappers such as Kendrick Lamar.

“There’s no one kind of jazz, any more than there’s one kind of art,” pointed out Bindman. “I hope people leave the exhibit with a sense of the richness and complexity of the relationship between the two.”

“The Art of Jazz: Form/Performance/Notes” is at the Cooper Gallery at the Hutchins Center, 102 Mount Auburn St., until May 8. The gallery is open Tuesdays through Saturdays from 10 a.m. until 5 p.m. The gallery is also presenting a weekly film series on the forms and influence of jazz, on Thursdays at noon from March 10 to May 5. The companion exhibition “Art of Jazz: Form” is at the Harvard Art Museums, 32 Quincy St., also until May 8. The museums are open daily, 10 a.m. until 5 p.m.