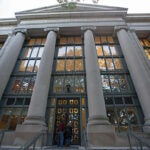 Peter Maurer, president of the International Committee of the Red Cross (ICRC), will receive the inaugural Elisabeth B. Weintz Humanitarian Award on Tuesday. Maurer will accept the award at a dinner and celebration in the Calderwood Courtyard of the Harvard Art Museums.

“Peter has been an intrepid advocate for strengthening humanitarian diplomacy, engaging states and other actors in understanding the respect of international humanitarian law, and improving humanitarian response through innovation and new partnerships,” said Michael VanRooyen, director of the Harvard Humanitarian Initiative (HHI). “His dedication to creating a safe and secure space for neutral, impartial, and independent humanitarian action is leading all of us toward a new future of aid.”

As ICRC president since 2012, Maurer has led the Geneva-based organization through a series of strategic reforms, building its capacity to engage in humanitarian diplomacy in favor of populations affected by war in some of the world’s most challenging environments. He has been actively engaged in access negotiations in Somalia, Syria, Ukraine, and Yemen, and has represented the organization as a neutral and independent actor in high-level, multilateral fora.

As a board member of the World Economic Forum, Maurer also has helped focus economic and financial sectors on sustainable financing of relief and development response, particularly in fragile states. Before joining the ICRC, he had most recently served as Switzerland’s state secretary for foreign affairs. He has more than 20 years of experience in interstate negotiation and mediation.

Also on Tuesday, Maurer will deliver a Director’s Seminar at the Minda de Gunzburg Center for European Studies at Harvard. The seminar will focus on the “Migration Crisis in the Mediterranean Region: A Humanitarian Perspective”; Jennifer Leaning, François-Xavier Bagnoud Professor of the Practice of Health and Human Rights at the Harvard T.H. Chan School of Public Health, and Melani Cammett, professor of government, will participate in the discussion.

In 2015, J. Frederick Weintz established the Elisabeth B. Weintz Humanitarian Award to celebrate the memory, compassionate spirit, and transformative leadership of his late wife, known as Betsy. The award is to be bestowed annually upon a visionary public figure who has demonstrated superior leadership in a time of humanitarian crisis.

“The humanitarian efforts at Harvard would not have been possible without the early and steadfast leadership and commitment of Betsy and Fred Weintz,” said VanRooyen. “Mrs. Weintz was a dedicated community leader in her hometown of Greenwich, Connecticut, but she also had a global vision.”

The Weintzes were early supporters of creating a program at Harvard focused on identifying ways to improve humanitarian response to crises globally and improving training for humanitarian aid workers. They provided the initial funding for the FXB Program on Complex Humanitarian Emergencies at the Harvard School of Public Health (now the Harvard T.H. Chan School of Public Health), which, with their ongoing support, evolved into the Harvard Humanitarian Initiative, an academic and research center. Since 2011, HHI has included an educational arm, established to build knowledge and skills among humanitarian leaders and aid workers on the front lines of relief work.