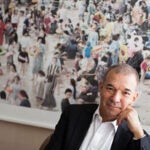 The Harvard Corporation on Monday approved a recommendation to retire the Harvard Law School shield, which came under fire amid student protests last fall because of its ties to the family of Isaac Royall Jr., a Massachusetts slaveholder who helped to establish the School through a bequest from his estate.

In a letter to Harvard Law School Dean Martha Minow, President Drew Faust and Corporation senior fellow William F. Lee said the School “should feel free to discontinue use of the shield.” With that response, the Harvard Corporation affirmed the recommendation of a committee appointed by Minow that the controversial shield be replaced.

“If the Law School is to have an official symbol, it must closely represent the values of the Law School, which the current shield does not,” the committee wrote earlier this month.

In an email to the HLS community Monday afternoon, Minow thanked the president and the Corporation, as well as the members of the committee whose recommendation the Corporation approved. She acknowledged that retiring the shield “will take some time, but the work has begun.”

“The opportunity to consider a new symbol on the threshold of our Bicentennial allows us to engage in a productive and creative focus on expressing the School’s mission and values as we continue to strengthen its dedication to intellectual rigor and truth, to reasoned discourse and diverse views, and to a community marked by mutual respect and inclusiveness,” Minow wrote.

“Our constant efforts to marshal talent to serve justice and to advance human freedom and welfare are the best way to symbolize the ideals of Harvard Law School,” Minow added. “We cannot choose our history, but we can choose that for which we stand. Above all, we rededicate ourselves to the hard work of eradicating not just symbols of injustice but injustice itself.”

The shield came under fire in October when a group of HLS students formed an organization called “Royall Must Fall” to push for discontinuing the use of the family crest as the School’s symbol.

In making its recommendation to the University, the HLS committee also noted that the shield’s use as the School’s symbol is not deeply historical. The School was founded in 1817, but the shield was not adopted until 1937.  The shield’s more widespread use dates to the second half of the 20th century.

While approving the recommendation of the committee, members of the Corporation also agreed with its assessment that “modern institutions should acknowledge their associations with slavery to understand the pervasiveness of the legacy of slavery and its continuing impact on the world in which we live.”

“While we accept the request to change the shield, we do so on the understanding that the School will actively explore other steps to recognize rather than to suppress the realities of its history,” Faust and Lee wrote in their letter.

Faust and Lee said they looked forward to receiving a recommendation from HLS for a new shield, “ideally in time for it to be introduced for the School’s bicentennial in 2017.”

“The School,” they wrote, “should have the opportunity to propose a new shield that, in the report’s words, ‘more closely represent[s] the values of the Law School’ — one conducive to unifying the Law School community rather than dividing it.”