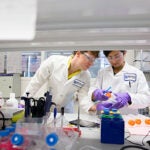 Strength in love, hope in science

A mosquito genetically modified to fight Zika virus, dengue fever, and other mosquito-borne ailments is being reviewed by the U.S. Food and Drug Administration for possible release in Florida. The mosquito is programmed to pass along a lethal gene to offspring.

The company behind the project, Oxitec Ltd., has reported a 90 percent decrease in the mosquito population in experimental releases in Brazil, Panama, and the Cayman Islands. That success hasn’t stopped some observers from airing concerns on the potential for unintended environmental consequences.

The Gazette sought insight on those concerns and others from Flaminia Catteruccia, an associate professor of immunology and infectious diseases at the Harvard T.H. Chan School of Public Health.

GAZETTE: I want to talk about the Zika virus and the genetically modified mosquito that might be released down in Florida. What can you tell us about that mosquito and how might it be useful?

The idea is to modify the mosquito genome so they will not be able to reproduce and propagate. You can generate in Aedes aegypti mosquitoes toxins that are repressed in the laboratory. … But once the mosquito is released, the repressor is not there anymore, the toxin gets activated, and the mosquito is killed.

The toxin is active during the early development of larvae. So if the mosquitoes are released and mate with the wild-type mosquito, their progeny would all have the toxin. If a larva has the toxin and it doesn’t have the repressor, it would not be able to reproduce for the next generation. You would reduce the number of mosquitoes in that generation.

GAZETTE: So the effect would be to essentially eliminate a generation of mosquitoes?

CATTERUCCIA: Exactly, though you would not eliminate, you would reduce the number of mosquitoes in the next generation. You would keep releasing these mosquitoes and target the entire population over a period of time. It would eventually lead to suppression of the field population. There would be fewer and fewer mosquitoes that can transmit disease. This is an idea that has been already tested … in the Caribbean and Brazil, and they were successful to a certain extent.

GAZETTE: So it’s aimed at the mosquito and not at Zika specifically? So every other disease — dengue and other diseases which that particular mosquito also transmits — would also be reduced?

GAZETTE: What are the chances that the mosquitoes might survive this preprogrammed self-destruction?

CATTERUCCIA: Mosquitoes are highly flexible organisms that have evolved resistance to pretty much everything we’ve done to them. We’ve used insecticides that are very potent, very toxic, but mosquitoes have become resistant to their action. It’s [also] possible that they will evolve resistance to mechanisms that are actually incorporated in their DNA. If the toxin is not very effective or if there’s a mutation so that mosquitoes have a higher metabolism to remove the toxin, then, slowly, the system would lose its power and the genetically modified mosquitoes would reproduce and spread again.

GAZETTE: So worst case is we’re back where we are now?

CATTERUCCIA: Yes, though there could be a slight modification, if they go through a population bottleneck, reduce in numbers, and expand again.

CATTERUCCIA: Yes. The concept is the same for all disease-transmitting insects: If you can eliminate them, you eliminate the disease. It’s not a new idea to suppress insect populations; it’s been around 50 to 60 years.

The idea of sterilization as a technique to reduce mosquito populations is based on the release of sterile males, in general, because females bite and can still transmit disease. The males go out in the field and they mate with the females, but there’s no progeny because the males are sterile. And eventually there are crashes in the population. It has been successful.

GAZETTE: An important factor, though, is that the females only mate once, is that right?

GAZETTE: You’re also working on a gene drive to make the mosquitoes immune to the malaria parasite.

CATTERUCCIA: Yes. This is a very hot topic of research at the moment. The mosquitoes, after all, are just carriers of the parasite and the virus. So what if we make the mosquito incapable of transmitting the disease? We don’t actually interfere with their population structure, keep the population the same, but we introduce factors that kill the parasite.

The problem is how to introduce this refractoriness into mosquitoes. That’s where the gene drive comes into the picture. The gene drive is an element that can spread through the population fast and in a non-Mendelian fashion.

GAZETTE: What about people who say we’re asking for trouble here, risking unintended consequences with either gene drives or the GM mosquito down in Florida?

CATTERUCCIA: I share those concerns. I think any modification of the environment should be tested carefully in the laboratory and in confined conditions. Studies have been carried out against agricultural insects that were wiped out in certain areas, and they weren’t followed up by studies about possible ecological harm in the following years.

It is very difficult to predict what will happen if you remove mosquitoes from the ecosystem, but there are not many organisms that feed on a specific and exclusive mosquito diet. Probably the food chain will not be much affected by targeting a specific species — not all mosquitoes. All these genetic [approaches] are very specific. You target one mosquito species at a time, which is very different from insecticides that can kill not just all mosquitoes, but all insects. So the specificity of the system means that the impact on the environment will be minimal.

When you release something that has a gene drive, however, could it potentially jump into other organisms, from the species that you released into a sister species? The chances are low, but it could happen. Gene drives [also] do not have boundaries and could spread to neighboring countries. So any release would have to be modifiable. Any release should be reversible. One of the things I’ve been discussing with [Harvard geneticist] George Church is that any gene drive mechanism should have a counter-drive mechanism … so the spread could be blocked and reversed. These are countermeasures that should be in place in case something goes wrong.

One needs to be very, very careful. If you use a gene that kills the plasmodium parasite in mosquitoes, how will it behave with other pathogens? Will it affect, for instance, insecticide resistance? If you affect dengue, how will that behave with yellow fever or now Zika virus? There are some things that can and should be done. There are lots of questions to be addressed before we can safely release them.

GAZETTE: So do you feel that the release of these mosquitoes in Florida is a good idea or is it premature?

CATTERUCCIA: Florida has the means to deal with the possible negative consequences, [though] I’m not convinced this strategy will work in the long term.

It might work for a few years or for a few seasons but resistance may spread in. This mosquito is highly resilient and highly adaptable. It is widespread around the globe. They’re a highly invasive species with a presence in the Caribbean and South America. If wiped out in Florida, how do you avoid the reintroduction of this mosquito? Then we’re back where we initially were.

They definitely should have a long-term plan. What happens the year after and the year after that is not clear. That’s what I would like to see before getting behind the release in the environment. It’s not a final step against these mosquitoes. We will have to deal with them again.