Ups and downs at Harvard Stadium 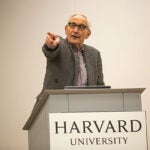 “Good morning!” barks a scarf-wrapped runner in tights, peering through the darkness as she climbs the steps into cavernous Harvard Stadium. A woman nearby responds, “Oh, Hallie, how are you? Give me a hug!” and the two embrace. It is just after 5 a.m., and the weekly ritual of the November Project’s local chapter — a Wednesday run up the stadium steps — has begun.

The November Project is a nationwide fitness movement that started in Boston in November 2011. Members rise before dawn to sweat through a strenuous workout punctuated by group hugs and shouts of encouragement. It works, these people will tell you.

With the lights off, the stadium is nearly pitch-black, save for the faintest illumination of distant streetlights. Two more runners appear, both wearing headlamps, and soon after a steady stream of athletes begins to arrive at the stadium. Fun, if you want to call it that, is in the offing.

People have been running the steps ever since Harvard Stadium was built, in 1903. The country’s oldest stadium, it consists of 31 levels of concrete seats across 37 sections. Runners typically ascend along the larger seats (15 inches high), and come down the smaller steps, half that height, between each section. Teams have trained on the steps for decades, most notably the crews under legendary coach Harry Parker, and hockey players coached by Bill Cleary in the 1970s and ’80s.

In addition to Harvard athletes, the steps draw marathoners and fitness buffs, mountaineers preparing for peaks such as Rainier and Aconcagua, and baby boomers trying to slow the aging process, who walk slowly but steadily, covering however many sections they can.

Most veterans of the climb will tell you it’s not speed that matters, but the mere act of getting out and pushing your limits. Without all the strain and struggle, the satisfaction that comes from running the steps would not be nearly as great.

— Photos and text by Jon Chase