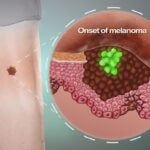 An investigation into the molecular mechanisms responsible for the most common type of benign skin lesion may lead to the first nonsurgical treatment for the growths called seborrheic keratoses (SKs), which can be cosmetically unattractive and often worrisome to patients. A paper by researchers at Harvard-affiliated Massachusetts General Hospital (MGH), published online in the Journal of Investigative Dermatology, reports that blocking the action of a specific signaling enzyme leads to the death of cultured SK cells and the breakdown of SK lesions.

“Our paper is the first to show that SKs are dependent on an enzyme called Akt for survival,” said Victor Neel, director of dermatologic surgery at MGH and lead author of the paper. “Inhibition of this enzyme in SK cells causes rapid cell death while having no effect on normal skin cells. We are confident that this paper heralds the development of an effective, topical treatment for SKs.”

Sometimes called senile warts, barnacles, or liver spots, SKs vary in color from tan to black, can be flat or raised, and range in size from quite small to an inch or more across. They become more common with aging; most individuals over 40 are likely to have a few, and some have hundreds scattered across the torso and face. While SKs have some microscopic features in common with their malignant counterpart squamous cell carcinoma and most have mutations in genes known to be involved in cancer, SKs never become malignant.

Previous research by members of the MGH team identified increased expression in SKs of growth factor receptors and other genes thought to be involved in skin cell differentiation and in skin cancer development. Neel explained, “We still don’t know why SKs resist malignant transformation, but we think studying SKs will help us identify factors that prevent benign lesions from becoming malignant.”

The two genes that are most frequently mutated in SKs — called PI3K and FGFR3 –— code for proteins that affect the activation of the Akt kinase enzyme, which is known to block several cell-death related pathways. Although previous studies have reported higher levels of activated Akt in SKs than in normal skin, determining the significance of that finding was hampered by the inability to grow SK cells in the laboratory. Through trial and error and a bit of luck, the MGH team identified conditions that permit SK cells to be cultured, opening up an array of opportunities for studying their biology.

Cultured SK cells were exposed to a panel of specific kinase inhibitors, confirming that the development and maintenance of SK cells requires the presence of activated Akt. One particular Akt inhibitor, called A44 (A-443654, produced by Abbvie Pharmaceuticals), was by far the most efficient at inducing the death of cultured SK cells. Small doses of A44 initiated a cell-death program called apoptosis. The researchers also found that applying A44 to intact SK lesions that had been excised from patients’ skin and maintained in culture caused the lesions to die through apoptosis.

“Within 48 hours of exposure to A44, the SK lesions from patients completely disintegrated,” said co-author Anna Mandinova of MGH’s Cutaneous Research Biology Center. “This effect was very specific to SK lesions, as A44 was harmless both to normal skin cells and to malignant squamous cell carcinoma cells.”

The MGH team is continuing to investigate the potential of A44 and several other compounds to identify the best candidate for clinical trials of a topical treatment for SKs. A patent application based on the study findings has been filed, and the team is continuing to pursue what SKs can reveal about the molecular differences between benign and malignant tumors.

“Understanding why SKs never become malignant, even though they have mutations in classic oncogenes, was the primary question we wanted to address when we started studying this skin lesion. Finding a novel inhibitor of SKs was a serendipitous byproduct of that inquiry,” says Neel, who is an assistant professor of dermatology at Harvard Medical School. “We suspect that other, yet-to-be-determined mutations in SKs are incompatible with the mutations that lead to malignancy. For example, p53 is commonly mutated both in sun-damaged skin and in cancers like squamous cell carcinoma, but is never mutated in SKs.

“We hope that pinpointing other mutations underlying SK development will help us understand how they resist becoming malignant, which could inform us of new ways of treating more dangerous tumors.”