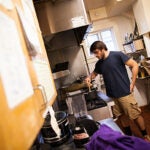 Cooperation is key to Dudley Co-op

A diverse student body is at the core of Harvard’s academic mission, providing irreplaceable experiences for students who will work in an ever-more-diverse world, and enriching both in-class and extracurricular experiences in innumerable ways, a faculty report on campus diversity has found.

The report — which was commissioned in January 2015 by President Drew Faust and Edgerley Family Dean of the Faculty of Arts and Sciences (FAS) Michael D. Smith, and was drafted by a committee led by Harvard College Dean Rakesh Khurana — found that Harvard’s commitment to student diversity is not a new development, though the idea of a diverse campus community has evolved over time, but rather a long-held belief in the power of being exposed to ideas, beliefs, cultures, and people different from those with which students may be comfortable.

“Diversity and excellence go hand in hand. That’s something the College has known for a long time,” Khurana said. “Diversity is at the heart of the mission of the College and has been a critical element of it [since] modern Harvard emerged in the 19th century.”

Approved Tuesday by the FAS faculty at a University Hall meeting, the report focuses on undergraduate student life and highlights numerous ways that the College has actively fostered a diverse campus community, in both the past and present. The vote, which approved the report as a statement of the values embraced by the faculty, comes amid a vigorous re-examination of diversity in its many guises across U.S. society.

Khurana said though past reports have similarly found a diverse campus community to be key to the College’s educational mission, it’s important for each generation to re-examine the issue and its place in campus life.

“It’s important for us to reaffirm these values in a way that makes sense for the current generation,” Khurana said.

The committee, which also included Henry Ford II Professor of Human Evolution David Pilbeam, McLean Professor of Ancient and Modern History and of the Classics Emma Dench, Richard Clarke Cabot Professor of Social Ethics Mahzarin Banaji, Professor of History of Art and Architecture Yukio Lippit, and Plummer Professor of Christian Morals and Pusey Minister in the Memorial Church Jonathan Walton, met regularly through last fall. Committee members reviewed several types of documents, including Harvard President Neil Rudenstine’s 1996 report on the subject, along with amicus briefs in past affirmative-action court cases, and student surveys. The committee also benefited from the views of members of the Harvard community.

The report is divided into sections examining the impact of diversity on facets of campus life. It looks at the importance of a diverse campus community to the College’s mission, the role it plays in student intellectual transformation, its influence on personal and social development, and its importance once students leave campus.

“Diversity is important academically and intellectually for the University, but also as important as we consider what our graduates go on to do,” Pilbeam said. “The world is more diverse than ever.”

For many in the Harvard community, an understanding and comfort with diverse experiences has been enhanced — or even developed entirely — at college. The college years are often the first exposure people have to different racial, ethnic, and national backgrounds, cultures, religions, and beliefs. Student surveys, which committee members reviewed, showed that students aren’t blind to the impact of the diverse community they find at Harvard.

The Class of 2019 is made up of 11.6 percent African-Americans, 21.1 percent Asian-Americans, 13 percent Latinos or Hispanics, and 1.5 percent Native Americans or Pacific Islanders, according to Admissions Office statistics. It also includes 11.6 percent international students and a range of economic backgrounds, with more than half of the class receiving financial aid. Of those students receiving aid, the average annual cost to their families was just $12,000 a year. As highlighted in the report, the University goes to great lengths to encourage not just a diverse student body, but one that interacts meaningfully. Those lengths include the non-random assembling of diverse students into freshman dormitory “entryways,” and the construction of and then randomization of Harvard’s upperclass Houses.

Pilbeam said that over the last few decades, he has seen the transformation in the classrooms of some of the world’s top universities firsthand. He started teaching at Cambridge University, and taught at Yale University for a time before coming to Harvard.

“The faces one sees in the classroom are very different than when I started in 1965,” Pilbeam said.

In their report, committee members described the College’s commitment to student diversity as long-held, dating back to Harvard’s founding dedication to “the education of the English and Indian youth of this country,” but also as imperfect, as ideas of diversity change over time. In the 19th century, Khurana said, geographic and class diversity was embraced — though racial, religious, and gender diversity was still to come — as the institution’s leaders looked at Harvard as a place to educate not just youth from Massachusetts and the Northeast, but from across America as a way to strengthen the nation.

“The arc of it has been toward greater and greater inclusion,” Khurana said. “Built into our DNA is continual questioning of this notion of who we are.”

The House system was devised with building a diverse campus community as part of its foundation, according to the report. At the time, wealthier students lived and socialized apart from the less-well-off, who were arriving in increasing numbers. Part of the rationale for the Houses was to bring these groups together to forge a single student body. By the 1990s, it had become apparent that students had self-sorted into different Houses, which prompted College leaders to begin randomization of House assignments as a way to ensure the Houses themselves reflected the College’s overall diverse campus community.

Self-segregation — seeking out the comfort of things, people, and ideas that are familiar to us — is something that everyone does, Dench said. Despite living in an increasingly diverse society, easy access to the Internet and an array of digital tools makes it easier than ever to tailor communications, information sources, and ideas to those that people may already agree with, shielding them from people and ideas that are different. Yet it is the very discomfort that results from being exposed to unfamiliar people, situations, and ideas that provides the broadening experience central to an undergraduate education, members of the committee agreed.

“You have to constantly take measures and get people of different backgrounds and experiences to talk to each other,” Dench said. “We have got to equip people to talk and listen to different points of view.”

Harvard’s financial aid policies also represent an effort by College officials to diversify the student body. Admissions policies have long been “need-blind,” assuring that students would be accepted based on their qualifications, not their ability to pay. As financial aid resources have increased, the College has worked to ensure that students of any means would not only be accepted, but be financially able to attend. Under current financial aid policies, Harvard covers the full cost of tuition, room, board, and all associated student fees for families making less than $65,000.

“We’re nothing without the fact of diversity, without trying to make mutual understanding better and putting it at the heart and center of what we do,” Dench said.