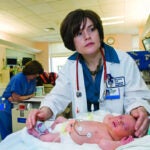 Politics is one of the biggest threats facing the global campaign to eradicate malaria, said a U.S. official tackling the disease, which kills nearly half a million people a year, including 300,000 children under age 5.

Though some 214 million malaria cases are still reported annually, disease incidence has declined 37 percent over the last 15 years, and deaths from malaria are down 60 percent, according to statistics from the World Health Organization.

That substantial progress is due to a coordinated global campaign in which global health officials, government-sponsored initiatives, and private efforts like that of the Bill & Melinda Gates Foundation pull toward the same goal, according to Rear Adm. Timothy Ziemer, U.S. global malaria coordinator for the President’s Malaria Initiative.

The U.S. effort has grown dramatically since it began in 2005, rising from $30 million that year to $670 million this year. Though the campaign has been global, with many key actors, U.S. support has been key, Ziemer said. Begun by George W. Bush and expanded under President Obama, it has crossed the U.S. political divide and continued support is critical in the coming decades if malaria is to be counted among the handful of diseases that have been eradicated.

“The top two risks are a change in political support,” Ziemer said.

No matter who next takes the White House, Ziemer said the strongest argument he can make to continue the program is its past success. Other speakers at the event, held at the Harvard Medical School’s Martin Conference Center and sponsored by the Harvard Global Health Institute, said a second significant argument is the disease’s striking ability to rebound.

The world first tried to eradicate malaria in the 1950s, using tools such as the drug chloroquine and the insecticide DDT. While those efforts were successful in the United States and southern Europe, they failed in many places around the world and the disease rebounded.

Ashish Jha, director of the Harvard Global Health Institute and K.T. Li Professor of Health Policy, who moderated the panel discussion after Ziemer’s talk, said that malaria today is at a threshold moment, like the one when the advent of a new generation of drugs changed HIV/AIDS from a death sentence into a manageable, lifelong illness.

“This notion of eradicating malaria feels sort of like the same moon shot,” Jha said.

Dyann Wirth, the Richard Pearson Strong Professor of Infectious Diseases at the Harvard Chan School and director of the Harvard Malaria Initiative, said that despite the progress made so far, significant work remains. The pressures being placed on both the malaria parasite and the mosquito that carries it are driving them to develop resistance to insecticides and medicines. As pressure continues to increase, she said scientists can expect further changes that will require new tools.

Though the global mortality numbers provide a strong reason to fight the disease, its toll on those it doesn’t kill is so widespread and debilitating that it constitutes a heavy economic drag on many developing world economies, Ziemer said. Because of that, money spent to reduce malaria carries a huge return on investment: 36 to one.

Ziemer called the idea of eradicating a disease as ancient and widespread as malaria “audacious,” and said the effort requires strong leadership and clear goals. Those include reducing deaths from 2015 levels by another 40 percent by 2020, 75 percent by 2025, and 90 percent by 2030.

Jessica Cohen, assistant professor of global health at the Harvard Chan School and a participant in the panel discussion, recommended expanding the use of bed nets, which are an effective intervention but are not used as widely or regularly as they could be. She said the challenge is changing behavior and making bed nets as regularly used as tooth brushes.

Wirth, however, said she thinks an effective vaccine is needed. Though prevention and treatment remain key, a vaccine, she said, is always there, protecting people whether they’re sleeping under nets or taking preventive drugs.

“As I think about long-term needs, I find it hard to imagine how to move ahead without a vaccine,” Wirth said. “Not investing in a vaccine is short-sighted.”