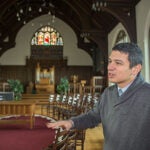 In return to campus, a look back at film that made them stars

In the opening sequence of “Love Story,” a voiceover declares that the film is about a young woman named Jenny Cavalleri who dies at 25. That young woman, played by Ali MacGraw, loved “Mozart, Bach, the Beatles … and me.” The “me” is Oliver Barrett IV, played by Ryan O’Neal.

Depending on whom you ask, the movie is either corny or enduring. But when “Love Story” was released in 1970 it became a zeitgeist hit, a modern “Romeo and Juliet” that lifted its young leads to stardom.

And it all started at Harvard — the movie, written by Erich Segal ’58, A.M. ’59, Ph.D., ’65, was one of the last granted permission to film throughout campus, in spots as iconic as Harvard Stadium and alongside University students.

In the 45 years since its release, “Love Story” has remained a touchstone for people who came of age in the ’60s and ’70s, as well as incoming Harvard freshmen, for whom a pre-semester screening has become a rite of passage.

Some of those freshmen turned out at Kirkland House on Monday for an Office for the Arts-sponsored discussion with MacGraw and O’Neal, who pulled up in a vintage MG convertible like the one Oliver commandeers in the film. Draped in a crimson and ivory scarf, O’Neal could have been Oliver returned to campus for his 50th reunion and, if not for her character’s premature demise, MacGraw might still have been Jenny — the Radcliffe musician from a working-class family who upends Oliver’s world. Hand in hand, they strode across the street looking the same, but older.

Of course the cameras were there to receive them, and when a passing student asked what was happening, he looked confused when the cameraman prattled off the actors’ names.

“Google it!” the cameraman said with a laugh.

Inside Kirkland House, the Harvard Arts Blog’s editor-in-chief, Alicia Anstead, led a discussion with the stars that ranged from their early impressions of Harvard to working together again after all these years. MacGraw and O’Neal are currently mid-tour for A.R. Gurney’s “Love Letters,” which runs through Saturday at Boston’s Citi Performing Arts Theater.

O’Neal called Harvard “a character in our story,” and MacGraw noted that it still looked the same.

The actors, now in their 70s, have weathered divorces and deaths and everything in between. MacGraw married producer Robert Evans and then her co-star Steve McQueen; bad boy O’Neal finally settled into a decades-long romance with Farrah Fawcett, who died from cancer in 2009.

“I had done one film — zero experience — and this was my second film. It was this joyful experience,” recalled MacGraw. “I might tell you in the ensuing decade it was rarely duplicated in terms of fun or optimism.”

The success that followed the low-budget film, including Academy Award nominations, surprised them both. “We were just hardworking people who got lucky and became actors,” said O’Neal. “You have to keep your feet on the ground because it’s easy to lift off and behave badly. And I know.”

On set, the two clicked immediately, said MacGraw. When pressed by Anstead to explain why, she answered: “There’s a chemistry and a caring, and we’re both Aries —”

The longstanding mutual affection prompted one brave audience member to wonder aloud whether there was more to their story. Though they were both married at the time, “We had tremendous crushes on each other,” revealed MacGraw.

As for Jenny’s famous line — “Love means never having to say you’re sorry” — MacGraw said, “I never questioned that — except for the next 45 years.”