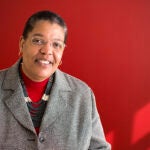 It all started with a wink from Lucy Liu.

In a darkened Sanders Theatre on Saturday, dance music pulsed and images of the actress flashed across a large screen suspended over the stage.

But it was when she made her entrance that the theater’s audience erupted in cheers. Liu, the 2016 Artist of the Year, was welcomed by S. Allen Counter, director of the Harvard Foundation.

Now in its 31st year, Cultural Rhythms, the Harvard Foundation’s annual celebration of diversity at the University, gives College student groups the opportunity to perform in Sanders Theatre, while also honoring those who have made major artistic and philanthropic contributions.

“Our hope is that this show today and this week of talking, celebrating, acting, is able to fulfill the ideal that is at the heart of the Harvard Foundation’s mission — to enhance the quality of our common life,” said Jonathan Sands, co-director of the festival.

Liu, an acclaimed American actress, producer, director, and philanthropist, has raised awareness of the plight of women and children in some of the world’s most impoverished countries and the international child trafficking industry. She has actively supported Women for Women, a nonprofit organization that has helped nearly 430,000 marginalized women in countries affected by war and conflict. And in 2012, she received the Champion of Peace Award for her “unyielding commitment to promote peace, justice, and human rights.”

As 12 student groups performed, Liu sat in a cushioned chair in the back corner of the stage, smiling and moving to the music.

The show began with the Kuumba Singers, the oldest existing black organization at Harvard College, their harmonies punctuated with sways and stomps. A group member stepped forward and said, “Music helps us sustain and guide our culture … and so we sing.”

The Harvard Philippine Forum stacked long, wooden benches from which they danced and jumped. Freshman-founded Omo Naija, a Nigerian dance troupe, opened to the sound of a rooster crowing, grabbing the crowd’s attention with flared red skirts and powerful stomps and smiles. Harvard Passus Step Team shook the theater with music created solely from their hands, feet, and shouts.

In between acts, Liu asked the performers questions about their rehearsal schedules and talents. “I feel like Jimmy Fallon,” she said with a laugh. Liu even indulged a couple of students from Mariachi Veritas with a cellphone selfie.

While presenting Liu with the award, William R. Fitzsimmons, dean of admissions and financial aid, reviewed her many artistic and educational accomplishments, including her talents in collage painting and sculpture.

“As we would say in Boston, you can be wicked ‘smaht,’ but also have a great ‘haht,’” Fitzsimmons said as he listed Liu’s staunch advocacy of gender equality, her role as a spokesperson for the Human Rights Campaign, and her time as a UNICEF ambassador.

“Today, I think we have all seen onstage the bravery, the absolute joy, the pleasure of presenting who we are, and how we are, with no excuses,” said Liu, addressing the audience from the Sanders’ stage. Holding her Artist of the Year award in both hands, she spoke of the importance of being present for one another, about taking time to forget about the midterms, finals, papers, and theses.

“These are all due, but we are also due for each other — to combine our hearts, our cultures, our languages, and accept them as they exist. Now and forever.”