Long-ago freeze carries into the present 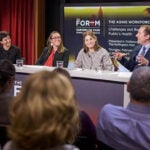 No rest for the graying

The sixth and seventh centuries were times of upheaval — famine and disease, migration and invasion, the rise and fall of empires.

The cooling was severe enough that researchers call it an “unprecedented thermal shock,” similar in magnitude to the warming predicted by today’s climate scientists for the end of the 21st century. It was likely triggered by a trio of volcanic eruptions between the years 536 and 547, including a massive blast in 540 thought to exceed the largest in recorded history, the 1815 eruption of Tambora, which caused “the year without a summer” across the northern hemisphere.

The work was published in the journal Nature Geoscience by an international consortium spanning 18 institutions. Using 660 tree-ring specimens from the European Alps and Central Asia’s Altai Mountains, it reconstructs 2,000 years of summer temperatures in the two regions and proposes beginning and end dates for the Late Antique Little Ice Age from 536 to 660.

“The synchronicity of the impact of 536, the sudden, dramatic drop in temperature between the heart of Europe [and Central Asia] is really quite remarkable and an unmistakable signal of a major development,” said researcher Michael McCormick, the Francis Goelet Professor of Medieval History and chair of Harvard’s Initiative for the Science of the Human Past. “The second thing is that the cold continues. … This looks pretty robust.”

Though defining the extent of the cold period is the report’s highlight, it also zeroes in on the modern era’s unusual warmth. The researchers found the current decade to be the warmest on record in both Europe and Central Asia, with Europe’s warmest summer occurring in 2010. In Central Asia, six of the 12 warmest summers have occurred since 2004, though the warmest of all dates back to 982.

By contrast, the coldest decade in the Central Asia record was the 540s, which is the second-coldest in the European record.

While the volcanic eruptions likely kicked off the freeze, researchers think that increased ocean ice cover coupled with an “exceptional” minimum of solar activity in the 600s reinforced and extended the cooling.

For the people living in the most affected regions, that meant a host of ills. Though the study cautions that causal links need to be more closely examined, McCormick pointed out that that the deep and prolonged environmental shock could have contributed to any number of significant disruptions.

“One [failed] harvest is bad. Two bad harvests is devastating. Three bad harvests and you have major problems.”

Among such events were migrations and invasions by the people of Central Asia east to China and West to the Middle East, and the fall of the Iran-centered Sasanian Empire, which stretched from Egypt in the west to Pakistan and Turkmenistan in the east. The period also saw the Justinianic Plague, one of history’s most devastating outbreaks, recently identified from ancient DNA as bubonic plague.

McCormick said the work points to new avenues of exploration for historians and archaeologists, and calls for reexamining historical interpretations of events that have often relied on human-centered explanations — population growth, conquest, government mismanagement. The findings add to a growing body of evidence that external forces, like disease and shifting climate, have played a significant role in such events.

“Now we have to go back and re-examine this history we thought was settled … with evidence we couldn’t see before,” McCormick said.

For example, McCormick said, the Roman Emperor Justinian is widely viewed as a failure, a leader whose attempt to re-conquer lands of the ancient Roman Empire was an overreach that ultimately failed. But the new findings complicate this narrative.

Justinian’s campaign coincided with the volcanic explosions that plunged Europe and Asia into deep chill. The striking concurrence of dates, McCormick said, may force historians to reconsider the record of the emperor, who led the Eastern Roman Empire after the Western territory, including Italy and Rome, had been lost. His reconquest of Roman North Africa in 534 was successful, as was his capture of Sicily in 535. In 536 — the year of the first volcanic explosion — he crossed to Italy, but progress slowed. He was able to conquer Naples and Rome before the campaign stalled entirely.

“Was Justinian really foolish or was he the greatest Roman Emperor, who played an amazing hand with unbelievable cards that came to him out of the blue?” McCormick said. “I don’t think anyone has investigated the potential role of a new little ice age in slowing down the conquest of Italy.”

The work also holds a message for modern leaders, McCormick said. Though the ancient period dealt with cooling rather than warming, the universal lesson is that leaders should be mindful that unexpected factors can have civilization-shaking impact.

“Modern leaders, with their careful preparation and with their detailed planning, sometimes lose sight … that there are exogenous jokers, wild cards, out there that are coming out of the blue and are capable of knocking civilization off its wheels.”