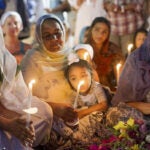 When he first encountered the work of Cormac McCarthy as a college student in the mid-’90s, Matthew Potts became spellbound by the novelist, whose dark and violent narratives have led readers deep into history (“Blood Meridian”) and forward into a post-apocalyptic future (“The Road”).

“Cormac McCarthy and the Signs of Sacrament: Literature, Theology, and the Moral of Stories,” draws on both postmodern theory and Christian theologies of sacrament to analyze McCarthy’s use of religious images and the moral significance of his stories.

The Gazette spoke with Potts about his book and how McCarthy’s fiction helps him see the value of human goodness in the here and now.

GAZETTE: You’ve said that McCarthy’s books are inflected with religion. What’s the role religion plays in his novels?

POTTS: On the one hand, there are many places in his books where institutional religion is skewered and critiqued without much ambiguity. The novels show impatience with institutional religion at large and with certain forms of religious life or practices. In spite of that, the novels are also adorned with religious images, especially sacramental images, all over the place. Even at the same time that Christian religious institutions are being undermined or dismissed, when rare moments of tenderness or goodness arise, they do so alongside images or invocations of the Christian sacramental tradition: the sharing of food, baptismal imagery, images of washing, the Eucharist. For someone like me, who wants to write from a Christian theological standpoint, I can use these books because I think they expose aspects of the sacramental tradition that Christianity sometimes forgets or neglects.

GAZETTE: What do you think sacraments represent, in the author’s view?

POTTS: One of the things McCarthy helps me see is that Christian sacramental tradition raises the question of what it means for the holy to be present in the here and now. Take the Eucharist, for example. There are longstanding and intractable arguments in Christianity over what it means for Jesus Christ to be present at communion. Some say the bread and wine must go away to make room for Jesus, that they only appear to be bread and wine but have actually become body and blood. Others say the bread and wine can only be symbols, because how could God really be present in bread and wine? In either case, however, there is a worry over allowing these ordinary things, bread and wine, to be recognized as holy. I think McCarthy wants to challenge that worry, to ask what holiness without transcendence might look like.

GAZETTE: How does all of this relate to his books?

POTTS: McCarthy is often interpreted, in popular culture, as agnostic or a nihilist or an atheist, and he might be all of those things. It’s clear that he’s really impatient with institutionalized religion and doesn’t believe in any idea of a sweet hereafter or a great beyond. But I think he does want to insist that even if we can’t hold onto a notion of transcendent goodness, we can hold some notion of goodness in the here and now.

GAZETTE: Where do you see that in his novels?

POTTS: In “The Road,” the story is of a man and his son in a post-apocalyptic world. There’s nothing to eat, everything is dying, but they are traveling to get to the ocean because they have the idea that once they get there, everything will be fine, something good will be waiting there for them. But when they get there, it’s not any better than before, it’s just as bad.

There is the common notion that a journey is redeemed by its end. That’s the way Christian theology often works, we endure the trying journey of life so we can end up in the sweet hereafter. But that doesn’t happen in “The Road.” Still, in the novel there are moments when the man and boy share bread and care for each other, and these are the moments that give meaning to their journey. The journey is not redeemed by its end, but by being with each other, that is what’s valuable. It’s not the great beyond that redeems the struggle; it’s actually the love for one another in the struggle. In my view, what he’s saying is that we don’t need to believe in the great beyond to believe in goodness.

GAZETTE: Can goodness be achieved through religion? Or can someone be a moral person without religion?

POTTS: Even though I’m religious, I believe that one can be perfectly moral without religion. In fact, because religion sometimes places all its concern upon another world instead of this one, I think it sometimes struggles to adequately attend to the moral problems of the world at hand. What I see in McCarthy’s novels is that he’s skeptical about the idea that the only source of goodness must lie beyond this world, and I happen to agree with that. If religion is to be of help in our world, it has to be to locate goodness in the here and now. Our task, as persons religious or not, should be to give attention to the world as it is, even if it’s broken, dying, or violent.

GAZETTE: What do you make of the violence and cruelty in McCarthy’s books?

POTTS: I’m unsettled by the violence because it seems gratuitous at times. I think that’s intentional, that McCarthy’s trying to unsettle us. Because although McCarthy’s violence is horrifying, it’s not fantastical. The things people do to each other in his books are things that people have done to each other in history and still do to each other today. I think McCarthy doesn’t see the value of testing the worth of goodness if the test is too easy or unrealistic. McCarthy creates the worst possible situations to make the point that if goodness still seems worthwhile under those circumstances, then maybe it really is worth the trouble. So I think he’s saying it’s worth the trouble, but it’s still trouble.

GAZETTE: Would you consider McCarthy a religious man?

POTTS: In an interview, when he’s asked whether he was religious, he said, “I wish I were,” which is interesting. It’s not no, it’s not yes. Michel de Certeau, the Jesuit scholar, said once, “The desire for faith is the same thing as faith.” For McCarthy to say, “I wish I were religious” raises the question whether or not he is. I wouldn’t call him religious or Christian just because I don’t know. I doubt he’d call himself one. But I think he’s useful to Christians and religious people.

GAZETTE: What do you mean by that? How so?

POTTS: He’s useful because of the way he manipulates the Christian tradition and exposes meanings that the tradition likes to ignore or neglect. A lot of Christians are troubled by his books and therefore put them aside or discount him as non-Christian, agnostic, atheist, or nihilist. … But in putting his books aside or reducing him to those categories, people who want to call themselves Christians may miss the opportunity to see what he’s exposing in the sacraments, miss recognizing how these sacraments might be meaningful to the Christian church and Christian lives today.

GAZETTE: Could you elaborate on that? Are you referring to the value of being good?

POTTS: It’s not only the value of being good, it also has to do with where the source of goodness lies. If you think about what happens at an altar, where the priest consecrates bread and wine, you could say that that ritual points to a heavenly banquet, and that what’s going on at the altar is just an imitation of that heavenly banquet. If you say that, you’re saying that the source of goodness and holiness lies outside this world. But if you say what happens at that altar is itself holiness, then you have to look at the people around you, regular people you may like or dislike, broken and fallible in all the usual ways, and maybe change your definition of what counts as sacred.

In his books, there are moments when people risk a difficult thing for the sake of love, and even if they may not be rewarded for it, they do it because it’s the right thing to do. I think when he writes such violent things, what’s he’s doing is asking us to think seriously about what the stakes of goodness are. Just because you’re good doesn’t mean the world is going to be good, just because you do the right thing doesn’t mean all is going to be OK. He makes the world not OK precisely in order to ask the question, “Is this still worth doing?”

GAZETTE: Many people consider McCarthy’s books very violent, but in your book you said that McCarthy defies violence and that he doesn’t celebrate it.

POTTS: One way to read him is that he’s celebrating violence. I don’t read him that way. In “The Road,” again, for example, the main characters, who are father and son, love each other and care for one another, and what McCarthy is trying to say is that it’s still worthwhile for them to love each other even though the man is dying and the world is not going to get better. That’s not a celebration of violence, that’s a realistic appraisal of violence, a defiance of violence. It’s McCarthy raising the question of goodness. It’s about doing the right thing even though it might put us at risk, even though it might not save us, because it’s valuable in and of itself, not because it carries us into safety or up to heaven.

GAZETTE: How do you think general readers should approach McCarthy?

POTTS: Just read him. I think they should read McCarthy and not be put off by the violence. There are many moments in his novels when one might want to stop reading because there is too much violence. I’d encourage people to keep reading. I really do think that McCarthy is trying to ask questions of meaning in a violent world, and if we stop after reading the violent parts without asking the question of meaning, then the violence simply stands. If we keep reading, we may find a way to stand up to it.