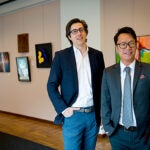 Tackling educational challenges around the world

What does Logan Square in Chicago have in common with Northern Iraq? For the authors of “Lessons from Logan Square: A Case for Community Engagement,” a paper presented at last week’s Global Education Conference, the answer is: A lot.

Both have endured violence, trauma, and a shifting multi-ethnic immigrant population, the speakers said. But one can learn from the other about how to secure better education for their children.

To outsiders, such a proposal may seem far-fetched. But not to master’s students at the Harvard Graduate School of Education (HGSE), who, as part of the course “Education Policy Analysis and Research in Comparative Perspective,” craft proposals on how to improve educational opportunity around the world.

According to 2011 United Nations report, 28 million children worldwide miss school because of violence in their communities. The proposals featured at the conference, “Learning to Change the World,” highlighted the challenges to education presented by war and other conflict.

Emma Bowell and co-authors Emily Pope, Nicole Starkey, and Shreya Mallavarapu said the example of the Logan Square Neighborhood Association could teach people in Iraq how to increase community engagement and reduce school segregation along ethnic or religious lines. The neighborhood in northwest Chicago at one point was so violent that the Chicago Sun-Times called it the “New murder hot spot: Hip Logan Square.” But with a Community Learning Center and a parent mentor program, the association “succeeded in rallying parents, teachers and local officials to improve schools in Logan Square,” Bowell said.

“With some adaptations, these programs could be used in Northern Iraq to engage families and community members in schools, thus helping to build social networks and promote religious and ethnic inclusion,” she said.

Other panelists discussed the shortage of teachers in rural Sudan, educational inequality in South Africa, and the need to provide education to Syrian migrants in refugee camps. They also covered issues such as how to teach 21st-century skills to Pakistani youth and foster peace education in Gaza, where co-authors Tatiana Shevchenko, Caitlin Vaka, and Megan Wilhelm, Ati Waldman said that a program that teaches problem-solving and peacemaking through games could be a solution. The program has succeeded in Colombia, a country wracked by a four-decade civil war.

“We’re preparing the leaders in international development and teaching them how to change the world,” said Reimers. “Students have to write papers about real issues and help organizations with real problems they face.”

Throughout the course, students team up with officers working for UNICEF, the UN children’s agency, in different parts of the world. They UN officers give the students information about the educational challenges they confront, and the students research and present policy recommendations that can be put in practice in the field.

“That’s one of the beauties of the course,” said Maung Nyeu, a teaching fellow and HGSE doctoral candidate. “Students get input and feedback from UNICEF officers who take their recommendations and use them. And when students graduate, they become researchers, practitioners, and policymakers.”

To help students reach a wider audience, representatives from the World Bank, Save the Children, the Bill & Melinda Gates Foundation, and USAID attended the conference. Among them were Charlie McCormack, former CEO of Save the Children and a fellow with Harvard’s Advanced Leadership Initiative; Atif Rafique, an education specialist with UNICEF; and Charles North, a senior administrator with USAID.

The chance to meet leaders in the international development field was one of the event’s highlights, said Shajia Sarfraz. Sarfraz, who grew up in the capital Islamabad, researched how to teach 21st-century skills to children in Pakistan.

“It is so important to meet with the practitioners in the field and make sure that our research is useful not just in academia, but as a way of making real impact,” she said.