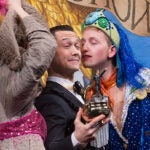 Erin O’Shea, the Paul C. Mangelsdorf Professor of Molecular and Cellular Biology and of Chemistry and Chemical Biology, has been named the sixth president of the Howard Hughes Medical Institute (HHMI).

A leader in the fields of gene regulation, signal transduction, and systems biology, O’Shea is the institute’s first female president. She has served as HHMI’s chief scientific officer since 2013, and has been an HHMI investigator since 2000.

O’Shea’s research is focused on how cells sense and respond to changes in their environment, work that has implications for understanding cancer and other diseases.

“We’re delighted to welcome Dr. O’Shea into her new leadership role as the next president of HHMI,” said Kurt Schmoke, chairman of the HHMI trustees and head of the committee that conducted the search. “She is not only a distinguished scientist but also a leader committed to advancing HHMI’s unique role in the research community. Going forward, Dr. O’Shea will build on her accomplishments at HHMI, as well as the success of outgoing HHMI President Bob Tjian. We look forward to this exciting new chapter.”

At HHMI, O’Shea will oversee a broad scientific endeavor that includes the HHMI Investigator Program, which supports researchers in HHMI laboratories across the United States. Also in the HHMI portfolio: programs that support early career scientists; initiatives that foster collaborative research; and projects that identify new opportunities to capitalize on the institute’s expertise in biomedical research and science education.

“HHMI pursues high-risk, high-reward science that can change the future,” said O’Shea. “I’m honored to have the opportunity to lead the institute, and I look forward to the important work ahead.”

A member of the National Academy of Sciences and the American Academy of Arts and Sciences, O’Shea received her undergraduate degree in biochemistry from Smith College and her Ph.D. in chemistry from the Massachusetts Institute of Technology.