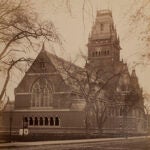 ‘A better version of itself’

Harvard is Joseph Gordon-Loving It. The actor (real last name Gordon-Levitt) who made a name for himself over six seasons on “3rd Rock from the Sun” and starred in films like “10 Things I Hate About You” and the upcoming “Snowden,” visited campus today in another important role: as Hasty Pudding Theatricals’ 50th Man of the Year.

No amount of snow or slush could thwart his fête, as it nearly did for 2013’s honoree Kiefer Sutherland. To commemorate five decades of Hasty men — beginning with the first Man of the Year, Bob Hope, in 1967, Gordon-Levitt participated in a special outdoor event at the Hasty Pudding Theatricals headquarters.

Gordon-Levitt — or Joe, as he’s known — first dropped by headquarters earlier this afternoon for a tour and a history lesson. Guides Dan Milaschewski ’17 and Betty Lema ’17 explained that the club, founded in 1795, was initially centered on pudding.

“So it’s not originally a theater thing?” Gordon-Levitt wondered.

In its new home at the site of the original House of Blues, the Hasty Pudding digs are a curiosity museum of its wacky antics and alumni — including, most notably, B.J. Novak and writers for Mindy Kaling’s “The Mindy Project.”

“More and more, we’re seeing a lot of people come out of the Pudding and doing things in Hollywood,” said Lema.

Gordon-Levitt is doing things outside of Hollywood, too. In 2011, he published “The Tiny Book of Tiny Stories,” the first of three volumes he edited from more than 8,500 submissions to his open-collaborative company hitRECord, which has also produced music, films, and the Emmy Award-winning series “Hit Record on TV with Joseph Gordon-Levitt.”

Curious and friendly, Gordon-Levitt seemed genuinely interested in Hasty Pudding’s evolution from a politics- and friendship-oriented society to a theatrical enterprise, one that often tests the boundaries of comedy and satire with its outlandish annual productions.

“I did a movie, and people did not appreciate it,” Gordon-Levitt told Milaschewski and Lema of his writing and directorial debut, “Don Jon,” alongside Scarlett Johansson.

But he was appreciated at Harvard. After being whisked underground for a secret initiation into the club, Gordon-Levitt re-emerged to receive a medal and a few ties, for good measure.

While Hasty Pudding’s Woman of the Year is traditionally paraded through Harvard Square, it’s unheard of for Man of the Year to make his public debut in anything other than the traditional evening roast. But throngs of fans braved the weather for a special afternoon event featuring the actor.

Not your average Joe

The Lexington Minutemen played a tune to usher him onstage, where he was given the key to the city by Cambridge Mayor E. Denise Simmons.

“I’ve never been given the key to any city before!” exclaimed Gordon-Levitt. “I wish I could build a fire for all of us! Go, L.A. Lakers!”

But he also acted, too. During a “date” with one of the Hasty Pudding cast members, Gordon-Levitt planted a kiss on one very deserving gal.

That’s when Gordon-Levitt switched up the game.

He grabbed the balloons and darted into the crowd, climbing into the audience to wild chants of “Robin! Robin!”

Next tasked with impersonating his friend and co-star Seth Rogen, Gordon-Levitt disrobed, down to Calvin Klein skivvies and mismatched socks.

The crowd roared. The star, whose breakout dance routine of Janet Jackson’s “Rhythm Nation” for Spike’s “Lip Sync Battle” recently went viral, can seemingly do no wrong. Not even an impromptu song called “10 Things I Hate About Myself” could ruffle this Man of the Year.

And so the Pudding Pot was offered, and received, joyfully.

“I spent the last two days here,” said Gordon-Levitt. “There’s a thoughtfulness, optimism, passion, worldliness, sense of humor that leaves me feeling optimistic about people younger than I am. You guys are really doing great.”