Blended voices, each with a personal charge 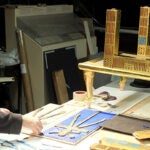 Egyptian-style handiwork with a digital past

Arriving to rehearsal in a hijab and a T-shirt reading “Feminism is the radical notion that women are people,” Anwar Omeish ’19 slammed the door behind her — intentionally. Then her poetic side took over.

Omeish paraded through the basement studio inside the Loeb Drama Center, her poem swelling into an impassioned soliloquy, haranguing a former teacher who’d once dubbed the speaker sassy: “Muslim girls aren’t usually like that,” he’d said.

Titled “Volumes,” Omeish’s poem spider-webs out of the U.S. feminist movement of the 1960s and ’70s, and dictates that she raise her voice, slam doors, startle.

“I’m responding to a June Jordan poem about sexual assault and silence, and the interplay of silence and volume,” said Omeish, who is from Fairfax, Va.

Jordan is one of five poets celebrated in “‘A Language to Hear Myself’: Feminist Poets Speak,” a Schlesinger Library exhibit running from Feb. 29 to June 17.

Archivist Laura Peimer and research librarian Amanda Strauss, the staffers behind the exhibit, knew a performance was in order and reached out to Radcliffe’s neighbor — the American Repertory Theater (A.R.T.).

'A Language to Hear Myself'

“The traditional model would have entailed performers reciting poetry at a podium, but we felt that we could experiment with the poetic form and make it come further to life by theatricalizing it,” said Graduate School of Education student Sammi Cannold, Hasty Pudding Artistic Fellow at the A.R.T. and the performance’s director.

As well as showcasing the works of the exhibited poets — Jordan, Eve Merriam, Honor Moore, Adrienne Rich, and Jean Valentine — the performance will make use of six student poems, all of which become powerful monologues under Cannold’s direction.

The one-night presentation will be held inside Schlesinger’s Carol K. Pforzheimer Reading Room. The space “has been the site of so much exploration into feminist history and feminist history has even transpired in the room, so it felt like the perfect setting to render meaning to the performed text,” said Cannold.

“In our production, the audience will be seated at the tables like researchers, they will be able to write their own poetry on the tables before and after the show, and the actors will perform around them and share their poetic stories directly with them.”

During rehearsals, Caro Ribeiro ’18 practiced the Lily Myers poem “Shrinking Women,” which posits the speaker at the dinner table with her family, noticing her mother’s meticulously constructed portions, the socialized standard for women to make themselves small — whether by weight loss or in everyday routine. “I asked five questions in genetics class today and all of them started with the word ‘sorry,’” boomed Ribeiro.

In deciding to join the performance, Omeish considered which voices were missing. “It was an opportunity to get a voice out there like mine, but also to be apart of a larger tradition,” she said.

The performance is set for 7:30 p.m. March 1. Tickets are required.