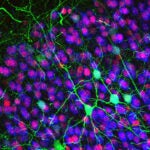 Building on research reported last year, Harvard Stem Cell Institute (HSCI) researchers at Brigham and Women’s Hospital have succeeded in identifying the neurons that secrete the substance responsible for the plaques that build up in the brains of Alzheimer’s disease patients.

The work has been published in the Journal of Neuroscience.

Focusing on the form of the disease found in early onset Alzheimer’s, in the 2 percent of patients who develop the progressive dementia before age 65, Tracy Young-Pearse said she and colleagues now “can examine amyloid beta secretion at the single-cell level, and better understand the responses of individual cells to drugs.”

“I think that could be very valuable” in developing treatments, she said.

Young-Pearse, an assistant professor at Harvard Medical School (HMS), said that her team’s latest work, carried out in collaboration with J. Christopher Love of the Koch Institute for Integrative Cancer Research at Massachusetts Institute of Technology, is an example of the latest advances in, and importance of, the ability to study disease processes on the level of individual cells.

“Chris Love developed this great system for looking at individual immune system cells, such as B cells and T cells,” Young-Pearse said, and “he helped us apply his system to neuroscience. I’m really excited about being able to apply this to neurological disease.”

Both the miniaturization and scale of the research system are massive. A single slide has 86,000 wells in it, each of which can hold a single cell for analysis.

The research was supported by the National Institutes of Health, the Harvard Stem Cell Institute, the W.M. Keck Foundation, and the Koch Institute.