Adventures of the heart 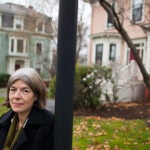 In his turn as frontiersman Hugh Glass in “The Revenant” — the adaptation of Michael Punke’s historical novel — Leonardo DiCaprio gives his boyish appeal a rest to fight for survival in the cold, cruel West.

Then there’s “Wild,” Cheryl Strayed’s memoir about hiking the Pacific Crest Trail while wrestling with grief for a mother and a marriage. (Reese Witherspoon roughed it through the movie version.)

There’s no short supply of stories whose characters are dropped into nature, but “Cree,” the debut novel from Visiting Professor Verena Andermatt Conley, is a little more tender than the norm, part “How Stella Got Her Groove Back,” part Thoreau.

Conley, who became smitten with the classic Western when she saw “The Man from Laramie” as a young girl living in Switzerland, was 18 when she landed in Madison, Wisconsin, on a college fellowship. It was west, but hardly the scene of those rough-and-tumble cowboy flicks. She cried for days.

But she got over it, and after eventually earning her Ph.D., marrying, and accepting a teaching post in Harvard’s Department of Romance Languages and Literatures, Conley finally got her slice of wilderness — she and her husband, Tom Conley, the Abbott Lawrence Lowell Professor of Visual and Environmental Studies and of Romance Languages and Literatures, bought a cabin in the remote Boundary Waters Canoe Area Wilderness in northeastern Minnesota.

The region serves as the backdrop for “Cree.” In northern Minnesota, sociologist Elle Baxter, having taken on a travel-writing assignment after a difficult divorce, meets the man who gives the book its title, an enigmatic and handsome guide who helps her reconnect with the world.

“I’ve always been interested in fiction,” said Conley, who typically writes on environmental theory. After publishing “The War Against the Beavers,” which she described as “a fictional memoir of sorts,” she set her sights on a more adventurous narrative.

“I wanted to write something about the environment and nature, but I wanted to get away from what seems to be the standard environmental plot that always has to do with a villain. ‘Cree’ is a mystical voyage of a woman who leaves a very shallow world of mundane success.”

Working at both her Minnesota refuge and her Kirkland House quarters, Conley wrote the book over four years. While none of the tale is autobiographical and much is inspired by books and films, some of the details are culled from real life — like, for instance, the inspiration for Cree.

“We went into a hotel to pause in the lobby during a snowstorm on the way to the cabin,” said Conley. “This youngish guy came in, must’ve been Chippewa, and I was just struck by his movements, by the way he looked, and I think that fleeting impression stayed with me.”

The character’s bond with Elle is complicated by Elle’s jealous and interfering daughter, a nod to the Françoise Sagan novel “Bonjour Tristesse.” The medley of European and American influences is not only cinematic, but also quite dramatic. It’s a side Conley isn’t done exploring.

“I’m working on another project,” she said. “The character meets a sports person on TV and then goes haywire. I’m having a lot of fun.”