Lacking a loo no longer 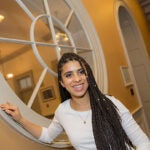 After irregular updates about its construction over the past year, Cambridge’s first free public toilet is now open for doing one’s business. About 60 city residents, workers, and officials gathered Friday in General MacArthur Park to inaugurate the permanent outdoor water closet just outside the gates of Harvard Yard.

But this is not your grandfather’s outhouse. The new structure in the tiny triangular park across from First Parish Church is a Portland Loo, a sleek, stainless steel, flush toilet kiosk of a kind invented in the Oregon city and now exported to other locales. The “comfort station,” as Mayor Denise Simmons called it in her pre-ribbon-cutting remarks, will stay open around the clock, year-round.

Inside, the space is commodious, with ample room for a wheelchair, bicycle, or baby stroller — and there is a changing table for the tykes. Slats in the top of the walls let in fresh air.

Residents attending the ceremony said the loo will fill an ongoing need in the Square, a commercial and cultural hub that attracts 8 million visitors per year.

“This is not just an amenity,” said Harvard lecturer Richard Parker, speaking after Simmons. “It’s a necessity.” Few stores in the district have public restrooms, and not every passerby wants to pretend to be a patron in order to powder his or her nose in a restaurant restroom.

The less fortunate, in particular, encounter obstacles to accessing indoor washrooms. “If you’re homeless or don’t look like their traditional customer, it’s not easy to go into a restaurant,” said Katherine Watkins, assistant commissioner of engineering for the Cambridge Department of Public Works.

That reality motivated two of the project’s prime movers, Parker, the Harvard lecturer and a senior fellow in the Shorenstein Center on Media, Politics and Public Policy, and Sarah Rosenkrantz ’14, co-founder of Y2Y Harvard Square, a youth homeless shelter. “It goes one small step toward making the lives of people suffering a little more comfortable,” said Parker. “We owe them that as citizens.”

“At Y2Y, we think a lot about what it means to have dignity,” said Rosenkrantz in her remarks. “How simple a toilet can be in giving someone dignity.”

The two led a coalition that included people from nearby Christ Church in collecting 6,000 signatures on a petition in support of a public bathroom in 2014. The Harvard Square Business Association supported the project, too, said Watkins. “A lot of perspectives came together for this.”

In a central location surrounded by heavy foot traffic, the loo is a convenient spot for a sanitary stop, not an ideal way station for drug use. Slats toward the bottom of the walls aid in ventilation but also allow waiting users to see whether the building is occupied — and let police monitor activity, said Watkins. The facility will be cleaned and maintained multiple times a day, and its walls are graffiti-resistant.

“We see this as a learning curve,” Watkins said.

If the experiment succeeds in Harvard Square, Watkins said the city will likely try siting another one in Central Square. You might say that this first loo is a lavatory laboratory.