‘A better version of itself’ 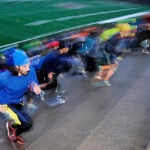 Ups and downs at Harvard Stadium

In the spring of 1840, the senior class at Harvard College numbered 46 — mischievous “boys,” complained one of them years later, who were often considered “culprits” under the presidency of tough-minded Josiah Quincy III, a former police magistrate and mayor of Boston.

At the association’s founding, five years after the College’s 200th anniversary, Harvard was emerging from its past as a training ground for ministers to a present that would soon minister to the world. Graduating classes numbered fewer than 100, a high mark only reached by the Class of 1860. Even the nascent alumni group soon served as an outsized convening force for fellowship and good works.

Today, HAA often serves as a lifelong bridge to learning and engagement for more than 375,000 current graduates. The association hosts more than 185 alumni clubs in more than 70 countries, facilitates 50-plus Shared Interest Groups (SIGs), and provides digital resources to connect alumni and provide online education opportunities.

“Alumni now connect around every kind of interest and shared experience,” said Philip Lovejoy, HAA executive director. “They connect live. They connect digitally. It’s a network that supports each other and the University.”

Meanwhile, Harvard alumni give back through networking, education, SIG leadership, and volunteering, whether for the HAA board, on boards worldwide, in global economic enterprises, or at Convocation or Wintersession events. Every year, alumni interview thousands of prospective freshmen. They raise crucial funds for financial aid — many of which promote student-body diversity, much like the ongoing Early College Awareness program.

“I always say alumni keep a university honest,” Lovejoy told Singapore alumni last year. “And in fact I would say that alumni own Harvard, both through governance, but also by being deeply invested in its success.”

Every year too, alumni are among 30,000 donors and volunteers for the Harvard College Fund, which at 90 years old celebrates its own anniversary this year.

Affecting
In the wake of all those years, the stunning work of Harvard alumni worldwide was made vivid last year in an inaugural “Harvard Impact Study: Global Social and Economic Impact of Alumni.”

Among the findings were that Harvard alumni have created 20.4 million jobs around the world; they serve globally on nearly 300,000 boards (a remarkable 66 percent of graduates have served on boards); they contribute 1.6 million volunteer hours every month; and they have created, worldwide, more than 145,000 for-profit and non-profit ventures.

Excluding financial-services firms, companies and organizations run by alumni have annual revenues of nearly $4 trillion, more than the GDP of Germany, the fourth-largest economy of the world.

“No matter where in the world I find myself,” said Harvard President Drew Faust, “I meet alumni who are making extraordinary — and extraordinarily diverse — contributions to their communities. It is fascinating to learn where their education has taken them and to see firsthand how deeply connected they are to Harvard.”

Harvard has reached across the world for students at least since the 19th century. But that reach — along with its global impact and the number of international alumni — has stretched even further in the last few decades. “Harvard was very much a local institution 50 years ago compared to the way it is today,” retiring HAA executive director John P. “Jack” Reardon Jr. ’60 told the Harvard Gazette in 2014.

Now alumni are from the far corners of the globe. But they share a common aim with graduates of every era. “They want to see the place strong,” said Reardon, “and want to support it in ways that can help it be strong.”

Associating
It may seem obvious by the survey’s accounting of modern impact, but why start an alumni association in 1841? Harvard then was tiny and parochial. American slavery was still legal, and the early roil of a divisive Civil War was already simmering.

For Harvard, the force and meaning of such a group was amplified by two historical factors that made an organization of good fellowship more likely than before. College restrictions that had made students feel like hectored “boys” were easing. The University needed to upgrade its quaint physical plant; alumni could help. And intercollegiate athletics was rising, and would soon become a nexus of deep affection and Harvard spirit.

The years 1840 to 1885 were “the heyday of ‘class spirit,’” wrote Samuel Eliot Morison in “Three Centuries of Harvard, 1636-1936.” He saw the era as a time of great awakening to the meaning of what graduates left behind and what they increasingly never let go of ― Harvard.

That awakening was aided by other factors, wrote the Class of 1841’s Samuel F. McCleary Jr. 50 years after graduating: the presence of older students, the demise of compulsory chapel, improving student relations with the faculty, and ― yes ― athletics.

Class spirit, wrote Morison, was propelled by spirited games on the field and river. “Athletic contests offered new occasions for emulation,” he wrote, “and bonds for class feeling.”

In the 1840s crew was in its infancy, as college clubs formed around heavy old Navy gigs were used to sport up and down the Charles River. But by 1852, with the first official race (against Yale), it came of age. In 1858, a Harvard crew of six took to the river wearing crimson headscarves of China silk. Other teams adopted the same unifying blood-red hue; in 1910 the Corporation named crimson the University’s official color.

Baseball caught on at Harvard during the Civil War, with the first games played on Cambridge Common. Football followed in 1873, and was quickly embraced by alumni. It helped that Harvard’s gridiron program, one of the oldest in the nation, had some sensational early years. Between 1890 and 1919, Harvard’s teams won the national championship nine times.

Beginning
The first official meeting of what became the HAA took place in a circuit-court chamber on Queen Street in Boston on April 26, 1841. Chairing the 90-minute gathering on that rainy Monday was 75-year-old John Quincy Adams, Class of 1787, the sixth president of the United States and the first president of a Harvard alumni group. (A Supreme Court Justice spoke too, reflecting Harvard’s intellectual stature and accomplishment even then. He was Joseph Story, Class of 1798, and Dane Professor at Harvard Law School.)

The group passed a resolution to fund a new building to be used for class anniversaries and for alumni meetings the day before each Commencement. (Two decades later, the idea led to Memorial Hall. That edifice was meant both to celebrate Harvard’s Union Army dead in the Civil War and to give alumni a permanent meeting place.) That was present-day Annenberg Hall’s first role and the source of its ring of alumni busts and portraits.

The founding group that would become the HAA had two primary goals: to support the University financially and to assist in University governance. The first goal was logical: Why not harness the power of Harvard’s increasingly prosperous alumni to the University’s needs? The second had a radical edge to it: to have a greater say in University governance. By 1865, the election of Overseers was placed in the hands of alumni, and legal ties were severed with the Commonwealth of Massachusetts. To this day, Harvard is the only private American university that gives its degree holders the authority to elect all of the members of its Board of Overseers.

“The foul and stormy weather continues,” wrote Adams in his diary entry on that first meeting-day. (He kept a journal nearly all his life, starting at age 12. By the time he died, the volumes numbered 51.) But that stormy day was to have sunny consequences for Harvard, including an alumni-led strategy to improve the brick-and-mortar University, which in 1841 still somewhat resembled the wilderness college it first was.

Building
In the association’s first century, alumni had a hand in improving and expanding the built environment: Memorial Hall (1874-1876); the Tercentenary Theatre and the class gates that gracefully ring Harvard Yard (1889-1902, mostly, beginning with Johnston Gate); Newell Boathouse (1900, a gift of the Harvard Club of New York); Harvard’s turn to the Charles River as its true gateway (1902, beginning with the alumni-named “Harvard Riverside Associates” and resulting in its “Gold Coast” dormitories); Harvard Stadium (1903); and Harvard’s residential Houses for undergraduates (1930-1970).

Adams was a builder too, a fierce proponent of a new Harvard Observatory. (He mentioned the project in the same 1841 diary entry.) By that fall, the Corporation was scouting a suitable site on Garden Street; by 1847, Harvard had the nation’s largest refractor telescope in place, where in 1851 the first detailed pictures of the moon were photographed.

Starting in 1863, a committee of alumni met to plan Memorial Hall. By 1866, they had raised $220,000, an astonishing sum for an era in which Harvard students paid around $100 a year for tuition. By 1874, the hall’s transept was dedicated; by 1878 the whole Gothic revival building was open, “a great, bristling, brick Valhalla,” novelist Henry James wrote. The hall had a 210-foot tower, intricate slate roofing, gargoyles sheathed in copper, and 5,000 square feet of stained glass. After that came the gates, the stadium, the Houses.

Yet just after the Civil War, Morison wrote, the College was in an academic doldrums that only its next president would cure. That was 35-year-old Charles William Eliot, who was named to that office in 1869 and who would make Harvard modern.

Expanding
“Harvard must expand with the country,” Morison wrote, “must save something for the advancement of learning out of this scramble for wealth.” As if on cue, Harvard clubs seemed to mirror the expansion of the nation. The Harvard Club of Chicago was the first alumni club to form, and right at the tip of the westward spear.

In the decade leading up to the Civil War, students had appeared at Harvard from places far removed from New England, especially the Deep South. By 1850, owing largely to the law school, almost a third of the Harvard student body were Southerners. But even those who ended up fighting for the Confederacy — an estimated 357 alumni, including 35 high-ranking officers — maintained affection for Harvard. That affection was a durable sentiment, wrote professor of Greek (and future Harvard president) C.C. Felton. He called the typical student “one of a great family [bound] by a thousand ties, which nothing in after-years could break.”

McCleary agreed that those early ties had become unbreakable, even for the old men — “a little handful” — who gathered 50 years later in 1891. “The true, genuine class-feeling,” he said, “becomes intensified in the advancing years.”

In that vein and in the spirit of a Harvard diaspora that has now expanded across the world, HAA executive director Lovejoy last December reminded students graduating in mid-year that their connection to Harvard does not end with their departure. He encouraged them to seek out the vast network of alumni around the world.

Lovejoy told them: “You can continue to be the change here, working to make Harvard a better version of itself.”