When one twin gets cancer, other faces higher risk 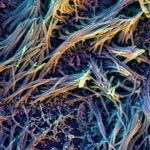 COPD, asthma now can be studied outside the body

A large new study of twins has found that having a twin sibling diagnosed with cancer poses an excess risk for the other twin to develop any form of cancer.

Among the 23 different types of cancer studied, an excess familial risk was seen for almost all of the cancers, including common cancers such as breast and prostate cancer, but also more rare cancers such as testicular cancer, head and neck cancer, melanoma, ovarian, and stomach cancer.

The study, led by researchers at the Harvard T.H. Chan School of Public Health, the University of Southern Denmark, and the University of Helsinki, is the first to provide family risk estimates for these and other, rarer cancers. The study also showed, for the first time, that in twin pairs where both developed cancer, each twin often developed a different type of cancer — which suggests that, in some families, there is a shared increased risk of any type of cancer.

“Prior studies had provided familial risk and heritability estimates for the common cancers — breast, prostate, and colon — but for rarer cancers, the studies were too small, or the follow-up time too short, to be able to pinpoint either heritability or family risk,” said Lorelei Mucci, associate professor of epidemiology at Harvard Chan School and co-lead author of the study.

The study was published online today in JAMA.

“Findings from this prospective study may be helpful in patient education and cancer risk counseling,” said Jaakko Kaprio from the University of Helsinki, the co-senior author of the study.

The researchers looked at more than 200,000 twins, both identical and fraternal, in Denmark, Finland, Norway, and Sweden, who participated in the Nordic Twin Study of Cancer and were followed over an average of 32 years between 1943 and 2010. Large twin studies can help scientists assess the relative contribution of inherited factors in cancer and characterize familial cancer risk by taking into account the genetic relatedness of identical and fraternal twins.

Overall, one in three people in the study developed cancer over the course of a lifetime. Cancer was diagnosed in both twins for 3,316 of the pairs, in whom the same cancer was diagnosed among 38 percent of the identical twins and 26 percent of the fraternal twins. The researchers estimated that when one fraternal twin was diagnosed with any cancer, the co-twin’s risk of getting cancer was 37 percent; among identical twins, the risk jumped to 46 percent. One of the strongest familial risks was observed for testicular cancer. The researchers found that a man’s risk of developing this disease was 12 times higher if his fraternal twin developed it, and 28 times higher if his genetically identical twin developed it.

Given the fact that fraternal twins are similar genetically to siblings who aren’t twins, the finding of excess cancer risk among fraternal twin pairs can provide information about an increased cancer risk for families in which one sibling gets cancer.

“Because of this study’s size and long follow-up, we can now see key genetic effects for many cancers,” said Jacob Hjelmborg of the University of Southern Denmark, the co-lead author of the study.

“This study was possible given the unique databases in the four Nordic countries, and will be a future resource to solve other complex questions in cancer,” said Hans-Olov Adami, adjunct professor of epidemiology at Harvard Chan School and co-senior author of the study.

Funding for the study came from the Ellison Foundation to the Harvard T.H. Chan School of Public Health and the Nordic Cancer Union.