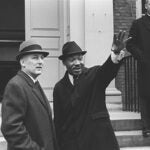 With the United States incarcerating people at a higher rate than any other nation on earth, a prison population that is larger than at any time in our history, and vast racial disparities in incarceration rates for African-Americans and whites, U.S. Attorney General Loretta Lynch ’81, J.D. ’84, called criminal-justice reform “a transformative issue of our generation” in a talk Wednesday at Harvard Law School (HLS).

The system is not only about litigating cases, but “just as important, how do we prevent people from interacting with the criminal-justice system? How do we stop them from making the mistakes that lead them into our system? And then, when individuals have served their debt to society, how do we make sure that they have a way to go home to their families, to their communities, to become productive citizens?” Lynch said during a conversation with Carol Steiker, the Henry J. Friendly Professor of Law and Special Adviser for Public Service at HLS.

Because the United States takes in and releases so many people each year — 600,000 federal inmates and another 1 million from state prisons — Lynch said the DOJ has an “obligation” to care for those in its charge.

“All of us in the administration have looked at the issue of the criminal justice system in a larger way than simply prosecutions,” she said, “because so much happens before a case file ever hits your desk.”

The granddaughter of a North Carolina sharecropper, Lynch, the first African-American woman attorney general, described how she found her way from a student who thought she would be happy limiting her career to communications law, through two appointments as head of the U.S. Attorney’s office in Brooklyn, N.Y., to her post as the country’s chief law enforcement officer and head of the Department of Justice (DOJ).

She urged students to use their time at HLS to explore different areas of law to discover what they are passionate about and consider the many ways they can participate in reform or public service without necessarily pursuing a career as a federal prosecutor.

“Sometimes it gets hard to leave the accepted path, particularly when you come from a place like Harvard Law School, because there are people who have expectations of what you should and should not do,” she said. “I remember vividly the night before I started as a federal prosecutor, my dad called me up and said, ‘You know, I bet if you called your law firm, they’d take you back!’”

Since being sworn into office in April following a politically contentious five-month delay, Lynch has been the driving force behind a number of high-profile cases involving policing and corruption, including an inquiry into the practices of the Baltimore Police Department following unrest last summer; the global bribery and money-laundering scandal within FIFA, soccer’s top body; and the federal hate-crimes prosecution of Dylann Roof, accused of murdering nine African-Americans in a Charleston, S.C., church in June. Just last month, following revelations around the 2014 death of Laquan McDonald, a black teenager shot 16 times by a white police officer, Lynch initiated a DOJ investigation into whether the Chicago Police Department routinely violates the constitutional and federal rights of citizens.

Lynch was in Boston supporting President Obama’s ongoing push to reform the criminal-justice system, an issue he highlighted during the State of the Union address on Tuesday. Before her stop at HLS, Lynch visited the South Bay House of Correction to talk with inmates and staff involved in a trio of innovative re-entry and recidivism programs that help prisoners improve their education, parenting skills, and job prospects.

She said many inmates told her the programs’ effectiveness stems largely from the fact that, for the first time, someone is helping them focus on who they are and could be and what they have to offer as parents and as community members.

“And when you think about it, all of us, no matter where we’re from … whether we are at Harvard Law School or whether we’re working or whether we in fact may be behind bars, all of us need a helping hand at some time or another. All of us have gotten to where we are because someone saw something in us and gave us that hand and gave us that help,” Lynch said. “And so, to be able to use the resources of the Department of Justice to expand on that and provide support for these programs is tremendously, tremendously gratifying.”

So far, there has been “very productive” discussion on Capitol Hill around several pending bills that largely limit or further reduce mandatory minimum sentences, as well as efforts to make retroactive many of the recent changes to narcotic sentencing guidelines, Lynch said. She also cited state-run reform initiatives that appear to be reducing violent crime and cutting prison costs.

Despite the increased political rancor between Congress and the Obama administration over the past year, Lynch said strong bipartisan support for reform in Washington “still exists” and that she’s “very hopeful” Congress will move forward on some measures this spring.