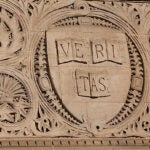 Two Harvard professors have won the Wolf Prize, considered the most prestigious award in science after the Nobel Prize and the Lasker Award. The Wolf Prize is presented annually by the Wolf Foundation, founded by Ricardo Wolf, a German-born inventor and Cuba’s former ambassador to Israel.

C. Ronald Kahn, chief academic officer and senior investigator at Joslin Diabetes Center and the Mary K. Iacocca Professor of Medicine at Harvard Medical School, will share the 2016 Wolf Prize in Medicine with Professor Lewis Cantley of Weill Cornell Medical College. Kahn was honored for his “pioneering studies defining insulin signaling and its alterations in disease. This work has been essential to understanding the pathogenesis of type 2 diabetes.” Kahn also recently was honored with the Harold Hamm International Prize.

“I am both delighted and surprised to receive the Wolf Prize,” said Kahn. “I am incredibly grateful for all of the support I have had throughout my career, both from the people in my lab and the many wonderful people with whom I have worked both within and outside of Joslin. While this is an international award and I have had some great fellows and colleagues from all over the world, a number of them have been from Israel, so winning the prestigious award in Israel is especially meaningful.”

Stuart L. Schreiber, the Morris Loeb Professor in Harvard’s Department of Chemistry and Chemical Biology, will share the 2016 Wolf Prize in Chemistry with Professor Kyriacos C. Nicolaou of Rice University in Houston. They will split the $100,000 award. Schreiber is a founding core member of the Broad Institute of MIT and Harvard, and is now director of the institute’s Center for the Science of Therapeutics. He is also a Howard Hughes Medical Institute investigator.

Schreiber was recognized for “pioneering chemical insights into the logic of signal transduction and gene regulation that led to important, new therapeutics, and for advancing chemical biology and medicine through the discovery of small-molecule probes.”

“My mentors and colleagues have provided guidance throughout my career to help me navigate life as a scientist,” said Schreiber. “And the trainees who joined my lab have been fearless, dedicated, and determined to make a difference. They make it a joy to come to lab every day. I am extremely grateful for this group, and deeply honored to share this recognition with my friend K.C. Nicolaou.”