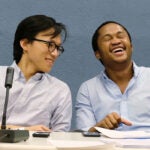 The giant red crane towering over Harvard Kennedy School (HKS) may be the most obvious sign that big changes are afoot, as the School’s 2½-year, $125 million campus transformation moves full steam ahead. But down at eye level, another significant transition is underway. Students, faculty, and staff returned to HKS this month to welcome the arrival of a new dean, Douglas W. Elmendorf, A.M. ’85, Ph.D. ’89.

A macroeconomist who has spent the past 20 years in public service, Elmendorf was admired in Washington for his careful, clear-eyed analyses and his willingness to stand up to sometimes extraordinary political pressure from all fronts.

From January 2009 to March 2015, Elmendorf served as director of the U.S. Congressional Budget Office, which analyzes the potential costs of tax, budgetary, and spending proposals from Congress and the White House. He oversaw cost projections for some of the most complicated and controversial pieces of legislation in decades, the Affordable Care Act and the 2009 stimulus package.

“As director of the CBO, he won widespread praise for his leadership and management skills, his integrity and fairness, his intellectual curiosity and analytical acuity, and his ability to work thoughtfully and constructively with people across the political spectrum,” Harvard President Drew Faust said when she announced Elmendorf’s appointment in June.

Prior to heading the CBO, Elmendorf was a senior fellow in economics and Bernstein Scholar at the Brookings Institution from 2007 to 2009. He has also held a number of economic research and leadership roles across the federal government, including the Federal Reserve Board, the Council of Economic Advisers, and the Treasury Department. Before entering public service, Elmendorf was an assistant professor of economics at Harvard from 1989 to 1994.

In addition to his role as dean, Elmendorf will also serve as the Don K. Price Professor of Public Policy.

The Gazette spoke with Elmendorf about his return to academic life, his leadership style, and what he expects will be his initial priorities in the coming months.

GAZETTE: What first drew you to public service and why did you decide to come back to Harvard?

ELMENDORF: I love public service because it combines interesting intellectual challenges with a real opportunity to make the world a better place, and that combination is incredibly fulfilling. Being dean of the Kennedy School is a chance for me to continue in public service, but in a different way than I’ve been able to do so far in my career. The School has an amazing faculty of outstanding teachers and researchers who are very engaged with policymakers. The School has equally amazing students who are contributing great energy and ideas while they’re at the School and who will go on to change the world. The chance to be part of that group of people and to help support what they’re doing is a wonderful opportunity for me, and I am grateful to have it.

GAZETTE: What will be some of your immediate priorities and concerns, and what will be on your agenda further out?

ELMENDORF: The Kennedy School is doing a lot of important things very well now. [Former Dean] David Ellwood and the many faculty members, staff, students and supporters of the School who have made it so strong should be very proud of what they’ve accomplished. I feel like I’m coming into a school that’s in an excellent position. But our job is to keep getting better over time. Archon Fung did an outstanding job as acting dean, and I appreciate all of his efforts. Fortunately, he will continue to serve as academic dean. My job, Archon’s job, the job of everyone who cares about the School is to build on the past accomplishments and make the School even stronger in the future. One priority we have is to improve students’ experiences at the School through continued innovation in what we teach and how we teach it. Another priority is to hire professors in areas where the School is not playing as large a role as it should. A further priority is to keep building a more inclusive community for students, faculty, and staff.

There are many areas in the School where members of our community are developing ways to strengthen what we do. One particular area that has come up in a number of my conversations with faculty and students is the role of technology in governance. Many governments are trying to use technology to respond to citizens, to implement services, to track their performance in ways that were not possible 10 or 20 years ago. We need to be sure that we are training students at the School to play leading roles in those efforts when they leave and that we are working with policymakers at the national, state, and local levels in this country and elsewhere in the world to make the most effective use of technology in what they’re doing. That’s an area where the School is not doing as much now as many people at the School think we should do, and we will push ahead on that in the next few years.

GAZETTE: Beyond technology, what is HKS not doing that it ought to be?

ELMENDORF: I don’t see particular weaknesses that have somehow escaped everyone else’s attention. But it’s very important that we not rest on our laurels. Even organizations that are highly successful need to engage in a constant process of renewal to be as good as they can be. I’ve been lucky to be part of a number of successful organizations, but every one of them had the potential to be even better than they were. That’s what I worked toward when I was in those organizations and that’s what I’m going to work toward at the Kennedy School. And I think the School is as strong as it is today because, for many decades now, the people at the School have not been content with what they’ve been doing, but have been looking for ways to do more and to do it better. That’s the spirit we need to sustain.

GAZETTE: Is there someone whose leadership style you most admire, and why?

ELMENDORF: I’ve been very fortunate to work with some excellent leaders. They’ve had somewhat different leadership styles because they’re different people. Leaders need to be true to themselves; we’re not all trying to be like one particular person. But there were common elements of these leaders’ styles that seemed quite important and that I’ve tried to emulate.

The best leaders I’ve worked with have listened to people carefully before making decisions; they’ve explained the decisions they’ve reached; and then they’ve helped the people in their organizations to do the things they’ve decided to do. I think all three parts of that are important. The nature of organizations is that not everybody will be equally happy with the direction an organization goes in. And sometimes I’ve watched leaders in my organizations make decisions that weren’t the ones I wanted them to make. But because I had a chance to offer my perspective, to hear other people’s perspectives, and to hear then the logic that the leaders followed in making those decisions, I understood where those decisions had come from. That made it much easier to figure out how to carry forward.

Also, the fact that the leaders didn’t just say, “Here’s what we should do. You go off and do it — good luck,” but said, “Here’s what I think we should do. Let’s talk through the best way to do that and I’m available to help do that,” made it much easier for me and others in those organizations to proceed effectively. So those are some of the traits that I’ve tried to follow in the leadership roles I’ve had before and that I will bring to the Kennedy School.

GAZETTE: When HKS first started — as the Graduate School of Public Administration, more than seven decades ago — very few, if any, professional schools focused on government and public policy. Today, there are a number of institutions covering similar terrain. Does that influence the way HKS approaches things like faculty and student recruitment or curricula?

The challenge for the Kennedy School is not directly affected by those other schools. Our challenge has always been, and remains, to be as effective as we can ― to train students as well as we can, to provide the best new ideas for public policy, and to work with policymakers as effectively as we can. That’s what we’re trying to do. I think it’s what other schools are also trying to do, which is great.

GAZETTE: As director of the Congressional Budget Office, your job was to cast a clinical eye on costs associated with legislative proposals and speak truth to power. HKS is currently in the midst of a $500 million capital campaign and undergoing a major campus expansion. What will be your role in these efforts and how will you bring your analytical and consensus-building skills to bear?

My job is to keep doing what David Ellwood did so well, which was to make the case to potential donors about what a tremendous difference they can make to the world by supporting the Kennedy School. I’ve been doing some of that already, and I’m very gratified by people’s responses. I think my previous job helps in at least two ways. First, I have a lot of practice explaining policy analysis to non-experts, which is part of what deans do with potential donors as part of the fundraising process. Second, I have a lot of experience watching policy being made from very close up, and that gives me credibility, I think, in explaining to potential donors why the work of the Kennedy School makes such a difference. And the truth is that for all the political tumult and speech-making I saw in my time in the Congressional Budget Office, serious analysis and imaginative ideas really make a huge difference in policymaking and policy implementation.

GAZETTE: What are some of the difficult and important public challenges that HKS must confront and lead on?

ELMENDORF: There are many challenges demanding our attention. One of the great strengths of the Kennedy School is that there are people with expertise in a huge range of policy issues, and I want to be careful about reducing that huge range to just a few points because I think one of our strengths is that we are helping to make the world a better place in many, many different ways. But certainly it’s very important that we help policymakers reduce poverty and inequality in this country and in many countries around the world. It is very important that we help policymakers in this country and around the world increase security relative to longstanding threats like nuclear weapons, but also to newly emerging threats like cyber attacks. It’s also very important that we help improve the process of democratic governance by addressing some of the dysfunction we see in the way governments work and in the way they try to meet the demands of the citizens. For all of those topics, the School’s truly global reach makes a big difference.