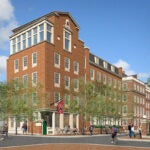 Janet L. Yellen, chair of the Board of Governors of the Federal Reserve System, will receive the Radcliffe Medal during Radcliffe Day on May 27, the Radcliffe Institute for Advanced Study announced Wednesday. The medal is presented to an honoree whose life and work have made a significant impact on society.

“As chair of the Federal Reserve, Janet Yellen steers our economy with steadfast commitment to robust growth broadly shared,” said Radcliffe Institute Dean Lizabeth Cohen, also the Howard Mumford Jones Professor of American Studies, Department of History at Harvard. “She uses her intellect and her ideals to strengthen our nation.”

The Radcliffe Day lunch will feature personal reflections from Ben S. Bernanke ’75, a distinguished fellow in residence in the economic studies program at the Brookings Institution and the former chair of the Federal Reserve, after which Gregory Mankiw, the Robert M. Beren Professor of Economics at Harvard University, will engage Yellen in conversation about her groundbreaking achievements.

Radcliffe Day — described as a remarkable day of celebration and exploration — begins with a morning panel discussion, “Building an Economy for Prosperity and Equality,” moderated by Cecilia Rouse ’86, Ph.D. ’92, the Lawrence and Shirley Katzman and Lewis and Anna Ernst Professor in the Economics of Education, and dean of the Woodrow Wilson School of Public and International Affairs at Princeton University. Rouse will lead four experts in a wide-ranging discussion about factors that invigorate and impede a thriving economy.

Learn more about the Radcliffe Day schedule, which will be webcast live on May 27.