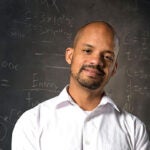 Koester was a leading scholar in the history of Christianity, New Testament exegesis and theology, the religions of the ancient Roman world, and archeology.

“Helmut Koester was a man of tremendous intellectual breadth and generosity,” said Laura S. Nasrallah, professor of New Testament and early Christianity. “He had a deep knowledge of ancient languages and ancient history, and a deep concern for informed historical and theological readings of New Testament texts. He wanted to push forward knowledge in the academy and for that knowledge to serve the church — in his case, the Evangelical Lutheran Church in America.

“He forged connections between archaeologists and scholars of the New Testament, creating interdisciplinary connections before the term was even popular. Those intellectual connections resulted in life-long collegial connections and friendships into which he drew his own students.”

Koester was born on Dec. 18, 1926, in Harburg, a borough in the city of Hamburg, Germany. He served in the German Navy during World War II (1943–45) and was captured in 1945 by the American armed forces. After his release from a prisoner of war camp, Koester studied theology under Rudolf Bultmann at the University of Marburg (1945–50). He then served as pastoral intern in the Lutheran Church of Hanover (1951–54). He was ordained into the Lutheran ministry in 1956. Koester’s attachment to Bultmann and Bultmann’s teachings continued throughout his life, and he dedicated his two-volume “Introduction to the New Testament” to him.

Koester earned his Th.D. in 1954 from the University of Marburg, writing his dissertation on the synoptic traditions in the Apostolic Fathers. He was assistant professor at the University of Heidelberg (1956–59) when he came to Harvard to join the faculty as a tenured associate professor. He was named John H. Morison Professor of New Testament Studies in 1963 and Winn Professor of Ecclesiastical History in 1968. He retired in 1998 but continued to be active in advising and teaching until 2014 and in research and writing until his death.