The Council on Library and Information Resources, through its Digitizing Hidden Special Collections and Archives awards program, has awarded a grant of $275,795 to the Radcliffe Institute for Advanced Study, in collaboration with the Yale Indian Papers Project, to create the Digital Archive of Native American Petitions in Massachusetts.

With support from the Mellon Foundation, the project will digitize more than 4,500 petitions on Native American affairs that were sent to the Massachusetts legislature from 1640 to 1870. The petitions are housed at the Massachusetts Archives, which has collaborated with Harvard in digitizing them since 2012.

More than a third of these petitions were sent from Native Americans themselves, including dozens of Native American nations, communities, and individuals. The project was planned in consultation with and with the support of the Mashpee Wampanoag tribe, the Wampanoag tribe of Gay Head (Aquinnah), and the Mohegan tribe, including consultation with representatives and governments of other Northeastern tribes and native communities. 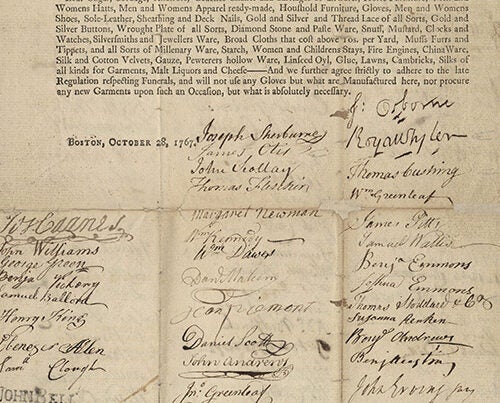 Along with the Harvard University Native American Program, led by faculty director Dennis Norman and executive director Shelly Lowe, Radcliffe’s work on this digital archive represents an important moment of collaboration between Harvard and the Native American tribes in the Northeast.

Because Massachusetts was an important trading and diplomatic space, the petitions come from the Great Lakes, contemporary Canada, Maine, and the Connecticut and Hudson River valleys. The petitions, already processed, will be cataloged with metadata information, and then digitized and rehoused.

The digital repository will be created at Harvard’s Dataverse and replicated at Yale. This free, publicly accessible resource will enrich Native American studies, American history, anthropology, and other humanistic pursuits.

The archive will build on the success of Harvard’s Digital Archive of Anti-Slavery and Anti-Segregation Petitions, a first-of-its-kind effort linking petition images (including signatory lists) to structural and contextual data, including an interactive map, funded by the National Endowment for the Humanities.