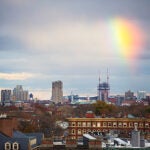 In 2012, Fanelesibonge Mashwama ’17 and Bo Seo ’17 met on a bus in South Africa en route to an international debate tournament. Little did they know that fate would lead them from two different continents to Harvard, to Pforzheimer House, and ultimately to triumph earlier this month at the World Universities Debating Championship (WUDC), the world’s largest debating competition.

“I remember thinking he was such a dynamic, energetic figure,” Seo said of his initial meeting with Mashwama.

The pair reconnected during the first weeks of their freshman year, joined the Harvard College Debating Union, and eventually became debate partners and block mates. Last year, they made it to the grand final of the WUDC competition in Malaysia, which made them more confident about their prospects coming into the tournament this year.

“We’ve been training pretty much since we got to school,” Mashwama said. “No team comes into the World Championship with a majority chance of winning, but we felt we had a good chance because we made it so far last year.”

Since debate competitions require participants to argue on any side of almost any topic, Mashwama and Seo try to be as well-read as possible, consuming a steady diet of current events, political theory, and philosophy.

“At the end of the day being good at debate boils down to a few skills that are applicable to life outside as well,” said Seo, a social studies concentrator who grew up in Australia. “I have to read a lot and speak eloquently, it’s not really separate from anything else I do at school.”

“It is very academic,” said Mashwama, a native of Swaziland who is concentrating in philosophy. “So even though it’s not formally part of our coursework, it’s complementary.”

Started in Scotland in 1981, the WUDC is the World Cup of the debate world. Originally composed of 43 teams from seven nations, the 2016 tournament hosted 400 teams from more than 70 nations. Students form teams of two in a Parliamentary-style debate in which teams are eliminated from the tournament over the course of a week’s worth of debates.

After more than two years competing together, Mashwama and Seo say they’ve developed a natural rhythm to their speeches and complimentary skills.

Still, with 15 minutes to prepare a seven-minute speech, there’s always room for improvement.

“You’re racing the clock,” Seo said. “And so there’s an impossibility of perfection. The time rushes by.”

So will the pair return to the WUDC next year to defend their title?

“Probably not,” Mashwama said. “The tournament means I’m gone most of winter break. I’d like to spend some time with my family.”