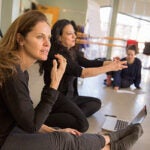 For the love of theater

On Aug. 5, 2012, a white supremacist walked into a Sikh temple in Oak Creek, Wisc., and started shooting. The resulting casualties ― the gunman killed six people and wounded four before dying of a self-inflicted wound ― made the attack, at the time, the worst hate crime in America (the shooting in Charleston, S.C., last year would claim more victims). That the response by the small Wisconsin city was not one of vengeance or retribution, but of reconciliation and a search for greater understanding, has been described as testament not only to the resilience of Oak Creek but to the better nature of the nation as a whole.

The story of that horror, and the healing that came after, is the focus of a short documentary, “Waking in Oak Creek,” which screened at the Brattle Theatre on Tuesday. The final installment of the Religion Refocused series, sponsored by the Pluralism Project at Harvard and made possible by support from Mass Humanities, the screening was aimed at bringing the conversation around the incident to Cambridge, as was a panel discussion afterward. Moderated by Diana Eck, director of the Pluralism Project and a professor of religion in the Faculty of Arts and Sciences, the panel included the filmmaker, Patrice O’Neill, as well as community activists.

“Waking in Oak Creek” opens with the 911 calls and incorporates police and news reports from the incident, the terror and chaos of which is made clear and personal in interviews with survivors. Family photos and film footage of the murder victims add to the poignancy, while interviews with Lt. Brian Murphy of the Oak Creek police, who was shot 15 times in the attack, illustrate the long road back for the wounded.

But the emphasis in the film is on community action. Candlelight vigils united the city, including groups as diverse as the local American Legion, Christian churches, and Jewish synagogues, while testimony by Sikh temple members brought about legislation that clarified the status of Sikhs in federal hate crimes.

O’Neill said that the 34-minute documentary, released in 2014, has been screened more than 3,000 times by community and police groups.

“This film is not about violence,” said O’Neill, a leader of the anti-bullying and anti-hate group Not in Our Town. “This film is about all the people … who can find a way to change and shift the culture that is becoming so toxic.”

Explaining the film’s title, O’Neill quoted Pardeep Kaleka, who was also part of the panel. A former Milwaukee police officer, Kaleka, now a teacher, is the eldest son of Satwant Singh Kaleka, the murdered president of the Sikh temple.

“We need to be awake,” O’Neill said, echoing Kaleka’s words in the film and citing the Sikh tenet of mindfulness and “relentless optimism” as the appropriate answer to hate.

“Belief that the world is basically good is the antidote to violence,” he said. Answering questions about his conversion, Michaelis recalled how various simple acts of friendship — a sandwich shared by an African-American co-worker, a job offer from a Jewish businessman ― ultimately guided him away from hate.

Karin Firoza, the assistant director of the Center for Spirituality, Dialogue, and Service at Northeastern University, took the discussion into the Boston area, talking about her work with local youth.

“There’s a lot of fear about being not only harmed but also discriminated against,” said Firoza, who is active with Boston’s Young Muslims Engaging, a high school group, and co-founded Roots & Wings Training and Consultation.

The 25th anniversary of the Pluralism Project will be celebrated during the opening of a special exhibit on Wednesday at 3 p.m. at Harvard Divinity School’s Andover-Harvard Theological Library. The celebration is open to the public and Professor Diana Eck will be on hand to provide remarks.