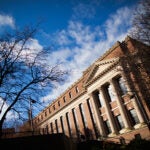 Shirley M. Tilghman, president emerita and professor of molecular biology and public affairs at Princeton University, will become the newest member of the Harvard Corporation.

A renowned scientist and longtime university leader who chaired a recent review of the life sciences at Harvard, Tilghman will begin her service as a Fellow of Harvard College on Jan. 1. She was elected Sunday by the Corporation with the consent of the Board of Overseers, in accordance with the University’s charter.

Announcing the appointment, President Drew Faust and William F. Lee, the Corporation’s senior fellow, said, “Shirley Tilghman is one of the nation’s foremost molecular biologists and one of higher education’s most admired and perceptive leaders. Her deep scientific expertise will bring valuable insight to the work of our governing boards in an era of transformative change in the life sciences and allied fields. Her broad experience in leading one of the country’s great universities will bring fresh perspectives and beneficial knowledge to our consideration of Harvard’s opportunities and challenges at a pivotal moment for universities.

“Beyond her remarkable resume, she is a person highly regarded for her intellectual curiosity and creativity, her collegiality and incisiveness, her nuanced understanding of complex organizations, and her dedication to advancing the progress of the institutions she serves,” Faust and Lee added. “We greatly look forward to welcoming her.”

As president of Princeton from 2001 to 2013, Tilghman expanded the university’s commitment to undergraduate financial aid; launched its four-year residential college system; oversaw the founding of academic initiatives in the arts, energy and the environment, and neuroscience; presided over the growing internationalization of Princeton’s programs; and guided the creation of a master plan for future development of the university’s campus, among other accomplishments. A past chair of the board of the Association of American Universities, she has been a prominent spokesperson for higher education and university-based research in Washington and beyond.

“It is a great honor to be asked to serve on the Harvard Corporation,” Tilghman said. “As one of the world’s most respected research universities, Harvard has the capacity to influence education, scholarship, and discovery in ways that extend well beyond its own campus. At this moment when there are so many challenging issues facing universities and colleges, I am very much looking forward to working with President Drew Faust and colleagues on the Corporation to help guide Harvard’s future course.”

A pioneer in research on genetics and genomics, Tilghman joined the Princeton faculty as the Howard A. Prior Professor of the Life Sciences in 1986 and was named an investigator of the Howard Hughes Medical Institute in 1988. Honored with Princeton’s President’s Award for Distinguished Teaching in 1996, she chaired the university’s Council on Science and Technology from 1993 to 2000, and served from 1998 to 2003 as the founding director of Princeton’s Lewis-Sigler Institute for Integrative Genomics. She was a leading adviser for the National Institutes of Health’s Human Genome Project, and her contributions to science have been recognized with such honors as the Society of Developmental Biology’s Lifetime Achievement Award, the L’Oreal-UNESCO Prize for Women in Science, and the Genetics Society of America Medal. She is currently serving a one-year term as president of the American Society for Cell Biology.

A native of Toronto, Tilghman received her bachelor of science degree from Queen’s University in Kingston, Ont. After two years as a secondary school teacher in Sierra Leone, she earned her Ph.D. in biochemistry from Temple University. She did postdoctoral work at the National Institutes of Health, working in the laboratory of Philip Leder, later the longtime chair of the Department of Genetics at Harvard Medical School. She carried forward her research as an investigator at the Institute for Cancer Research in Philadelphia and as an adjunct associate professor at the University of Pennsylvania before launching her Princeton career nearly 30 years ago.

Recognized with both a Harvard honorary doctorate and the Radcliffe Medal in 2004, and with Harvard’s W.E.B Du Bois Medal in 2009, Tilghman has collaborated with Harvard scientists on various matters over the years and has been a close colleague of President Faust on a range of matters of common concern to leading research universities. In view of her combination of broad scientific expertise and university leadership experience, she was appointed to chair the comprehensive review of the life sciences at Harvard that was undertaken this fall.

In addition, she was recently named to the board of directors of the Broad Institute of Harvard and MIT. In decades past, she served Harvard as chair of the visiting committee for the former Department of Cellular and Developmental Biology and as a member of the visiting committee for the Division of Medical Sciences. She also served on the ad hoc committee appointed by Harvard President Neil Rudenstine in 2000 to advise Faust, then dean-elect, on charting a course for the Radcliffe Institute for Advanced Study, following the merger of Radcliffe College into Harvard University.

Tilghman is a widely experienced trustee and director, serving on the boards of Amherst College, the Carnegie Endowment for International Peace, Google, the Institute for Advanced Study, the King Abdullah University of Science and Technology in Saudi Arabia, and Leadership Enterprise for a Diverse America. In addition, she is an elected member of the American Academy of Arts and Sciences, the American Philosophical Society, and the Institute of Medicine, a fellow of the Royal Society of London, a foreign associate of the (U.S.) National Academy of Sciences, and an Officer of the Order of Canada. Her honors include some 25 honorary degrees.