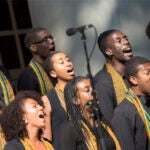 The gift of Kuumba

Scholars debate the future of Spanish in the U.S.

Scholars who gathered at Harvard’s Instituto Cervantes Observatory of the Spanish Language said the future of Spanish in the United States is somewhat uncertain.

Before a packed room at the observatory’s offices on Arrow Street on Thursday, academics Nicolás Kanellos of the University of Houston, José Luis Garcia Delgado of Complutense University of Madrid, and Juan Carlos Jiménez of University of Alcalá in Spain shared cautious optimism on the language’s prospects.

First, they exuded confidence about the growth of the Hispanic population in the United States, fueled by Latin-American immigration. With nearly 40 million speakers, Spanish is the country’s second-most-common language.

But the academics were more cautious when they pondered the barriers that Spanish faces to becoming an esteemed language here, where bouts of nativism have led to English-only movements, opposition to bilingualism, and hostility toward Latin-American immigrants.

They debated candidly about whether Spanish will lose its link with low educational attainment and unskilled labor and gain respect and acceptance among English speakers.

Acceptance is already happening. More and more American high school students choose to study Spanish rather than French or German as a foreign language, businesses actively recruit bilingual employees to reach out to the growing Hispanic market, and even politicians make bilingual efforts to appeal to Hispanic voters.

That Spanish is getting recognition underscores how valuable it has become to Americans and other Spanish-speakers, who see it as sign of their identity and as an asset in a globalized world, said Francisco Moreno-Fernández, executive director of the Cervantes Observatory.

But Spanish could yet fade if it’s not passed on. As a result of assimilation, second- and third-generation immigrants don’t speak Spanish as well as their parents, and as they become better-educated and climb the income ladder, they often leave the language behind.

It’s an outcome that could be avoided, said Jiménez, an economist, if Spanish speakers choose to be bilingual rather than go for one language over the other.

“The future of Spanish in the United States depends on the fact that Spanish speakers learn English, assimilate into society, gain a better education, and keep speaking Spanish,” he said. “If Spanish continues to be a language spoken by poor immigrants, it’s going to become invisible.”

Spanish was the first European language spoken in the territory that spans from Florida to California, with the arrival of the Spaniards in the 1500s, said Kanellos.

Spanish has replaced German as the language that most Americans spoke after English, and its rise is not over yet. According to a U.S. Census report on language projections, the number of Spanish-speakers is projected to increase to 43 million by 2020, which would make the United States home to one of the world’s largest Spanish-speaking populations.

What happens next lies with those who speak Spanish, said Kanellos.

“For over 400 years, Spanish speakers in the United States never stopped using Spanish,” he said.

But will Spanish continue to be the second-most-common language in the United States? More likely than not, the answer is sí.