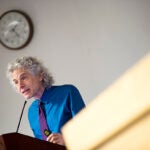 Violence in streets, hope in the data

On a recent afternoon at Harvard’s Carpenter Center for the Visual Arts, Peter Galison did some quick math to make a monumental point.

Galison’s calculation underscores one of the central themes in the documentary he co-directed with Robb Moss, chair of the Department of Visual and Environmental Studies. “Containment,” edited by Chyld King, is an unflinching look at the near-impossible task of disposing of nuclear waste from the country’s Cold War weapons buildup and exhausted nuclear reactor fuel assemblies.

It also asks: How do you warn future generations to avoid repositories that will remain lethal for 10,000 years or more?

“The starting point for us is this conundrum of how do you mark a site for 10,000 years, and that that’s not just an abstract question, that’s a real question,” said Moss. “We are making this stuff, it’s very toxic for a very long time. We do, if we feel the urge to — we have a moral responsibility to warn the future. It’s perhaps not possible to warn the future. That doesn’t stop the need to try to.”

The film, five years in the making, focuses on two U.S. facilities. One is the Savannah River Site in South Carolina, which produced roughly 40 percent of the plutonium used in Cold War weapons. The documentary includes chilling archival shots of men tossing cardboard boxes labeled “radioactive waste” into shallow pits and covering them with dirt. A voiceover notes that in Savannah, “the whole idea of managing the nuclear wastes was really an afterthought.”

Today the facility is a clean-up site where roughly 30 million gallons of radioactive material is stored, much of it in carbon steel tanks. Signs along a lush but deadly river forbid fishing, and radioactive crocodiles and turtles are kept in isolation.

The film’s second focal point is the Waste Isolation Pilot Plant in Carlsbad, N.M. A deep underground geological repository licensed to dispose of radioactive waste, WIPP, Congress declared, could not be built until officials came up with a plausible marking plan that would warn people for 10,000 years not to dig there.

But how do you communicate across such a vast swath of time? Galison and Moss interview the scholars, artists, scientists, architects, and futurists whom the government asked to sketch out scenarios depicting why someone thousands of years in the future might disrupt the waste, and to design an effective warning system informed by their predictions.

To illustrate the extremely distant future the filmmakers chose their own types of sketches — vivid, graphic-novel-style sequences portraying robots digging up the waste, an underground train running from Houston to Los Angeles straight through the site, looters ransacking the area, and humans returning from space and blowing up the site. Each encounter sets off a nuclear disaster.

“You can’t actually put a camera on the future,” said Moss. “It was important to think broadly in some big way and the animation was going to get us there … It needed to be something schematic, sort of like [the experts] were asked to do themselves.”

“We tried to find a visual form that would match that sketchiness of the far future,” added Galison.

In the end, the experts decided on a kind of visual (and visceral) warning system: giant stone spikes described in the film as a “landscape of peril.” The first nuclear waste arrived at WIPP in 1999.

The dread of “Containment” is tempered by a deep sense of humanity. In 2011, well into production, a massive earthquake and subsequent tsunami rocked the coast of Japan, crippling the Fukushima Daiichi power plant and leading to wide concerns about radiation exposure. Galison and Moss traveled to the region in May 2013.

Armed with protective gear and a dosimeter (an instrument for tracking radiation levels), the filmmakers trekked through neighborhoods close to the plant, finding houses ripped from their foundations, boats resting atop cars, and abandoned streets. Landscapes made deep green by spring rain were also highly radioactive.

“Going to Fukushima changed everything for us,” said Moss. “I don’t think we quite understood that until we went there. We didn’t quite know what we would encounter, but we had to experience being in a radioactive environment and what it did to the communities, and what it looked like.”

In one of the documentary’s most moving sequences, the filmmakers trace the weekly pilgrimage of an elderly man who fled the contaminated area along with tens of thousands of others. He visits his abandoned home, he tells the camera, just to maintain a connection to his past.

“Home just makes you feel better,” he says. “That’s why I’ve visited mine 200 times or so since we evacuated. About every other day. It’s not like I do anything special here. I’m just home.”

“Containment” marks the second time Galison and Moss have collaborated on a documentary, after “Secrecy,” from 2008. One key to their chemistry, Galison said, is a shared preference for working without a script, so that the story unfolds organically.

Their goal with the new film was to generate something provocative and exploratory, rather than definitive and argumentative, said Moss. “We want to have people immersed in the deep and human complexity of what it means to have produced all these nuclear materials.”

But the message goes beyond doom and gloom, his co-director noted.

“We wanted the film to not just be a grim account of endless shots of destruction, but also to capture something imaginative and broader,” said Galison. “Something hopeful about the fact that humans, in this one instance at least, are not thinking about the end of the fiscal quarter or the end of an election cycle or the beginning of a campaign, but about something 400 generations in the future. And just the act of having to think that far ahead, we felt, reflects something deeply hopeful.”

“Containment” will be screened at the Harvard Film Archive at 7 p.m. Thursday.