How to be your best in 5 minutes 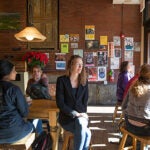 It’s that make-or-break moment. You head into a room for a job interview, to give a presentation, or to take an exam. In theory, you should ace what’s coming: You’ve got the credentials, rehearsed what to say, and mastered the material.

But when it’s time to put your best foot forward, your body and mind go into meltdown as you sink into a dark spiral of panic, anxiety, and self-doubt that leaves others unimpressed. You walk out full of regret, knowing that you didn’t rise to the challenge and wondering what you can do to prevent the next pivotal opportunity from slipping away.

Social psychologist Amy Cuddy says there are some easy ways to help people rise to the occasion and dial into an inner strength that showcases their very best.

“Presence is your knowledge of and ability to access your most authentic self — your core values, your best talents and abilities, your expertise — and to really bring it forth when you need to, which is usually when we’re least likely to be able to do it,” said Cuddy, an associate professor of business administration at Harvard Business School (HBS), during an interview about her book “Presence,” out later this month.

“The meta-analyzing we do of other people’s reactions to us: That’s the downfall. It takes us completely out of the moment in terms of the thoughts we’re having, but it also really mucks up the gears in our brain.” When someone feels powerless or like an “imposter,” tools such as executive function, memory, even listening skills take a nosedive.

Having presence doesn’t mean always getting the results you want, and it doesn’t require being extroverted or charismatic or especially polished.

“It doesn’t give you skills or talents you don’t have; it helps you to share the ones you do have. It doesn’t make you smarter or better informed; it makes you more resilient and open. It doesn’t change who you are; it allows you to be who you are,” she writes.

Contrary to popular self-help notions, presence doesn’t involve looking in the mirror and reciting hokey daily affirmations like Stuart Smalley, the classic “Saturday Night Live” character. Rather, it’s being comfortable with who you are and, more importantly, presenting yourself authentically.

“You cannot choreograph presence; it comes across as disingenuous and asynchronized. Presence can’t be faked,” she said.

The book builds on the research and reverberations from Cuddy’s wildly popular 2012 TED talk about the body-mind connection, a video that’s been viewed more than 29 million times. By adopting “power poses” for 2 minutes before an important event, people can positively shift their self-perception and behavior, which in turn changes how others perceive them.

“Our body language, which is often based on prejudices, shapes the body language of the people we’re interacting with. If we expect others to perform poorly, we adopt body language that is off-putting and discouraging. Naturally, people take the hint and respond as expected — poorly. How could anyone ace an interview under those circumstances?” she writes. “When our body language is confident and open, other people respond in kind, unconsciously reinforcing not only their perception of us, but also our perception of ourselves.”

By adopting “power poses” for 2 minutes before an important event, people can positively shift their self-perception and behavior, which in turn changes how others perceive them. It’s not so much “fake it till you make it” as “fake it till you become it,” says author and social psychologist Amy Cuddy.

Through small self-nudges, such as assuming expansive body postures like “the starfish” or “the Wonder Woman” — poses modeled on ones used in the animal kingdom to assert power — people can at least briefly quiet the negative interior monologues that undermine them.

“What it’s doing is allowing people to be in the moment instead of worrying about what might happen next or what they did a second before or what this person thinks of me,” said Cuddy. “And that’s, in a way, what personal power really is. It’s the ability to really bring yourself and absolutely be there and fully engaged, and not be stuck in some worry cycle.”

“It’s all about focusing on 5 minutes from now, not, ‘In a year I’m going to be in the C-suite,’” she said. “I think the only way we can make progress is to gently and forgivingly nudge ourselves each time a little bit forward, and then incrementally, in aggregate, you look back one day and say ‘Oh my gosh, I got all the way here.’”

Cuddy said her prior work on stereotyping and prejudice prompted a strong interest in sharing social science research with non-academic audiences and helping people who don’t necessarily have status or social power, like some women, the elderly, and the disabled, so they are able to tap into feeling powerful in their everyday lives without spending big bucks to take a spiritual pilgrimage or a yoga retreat.