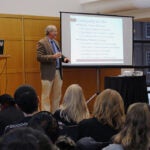 The American Academy of Arts and Sciences named Harvard John A. Paulson School of Engineering and Applied Sciences Professor Federico Capasso and electrical engineer Alfred Cho as the recipients of the 2015 Rumford Prize on Tuesday, in recognition of their contributions to the field of laser technology.

The award will be presented to Capasso and Cho, both of whom are members of the academy, on April 14 at the American Academy’s headquarters in Cambridge, Mass. Capasso is the Robert L. Wallace Professor of Applied Physics and Vinton Hayes Senior Research Fellow in Electrical Engineering at the Harvard John A. Paulson School.

At Bell Laboratories in 1994, Capasso and Cho invented the quantum cascade (QC) laser, a concept first proposed by Rudolf Kazarinov and Robert Suris in 1971. A revolutionary new light source, the QC laser is widely used as a source of radiation for chemical sensing and spectroscopy. Common commercial applications of QC lasers include trace gas analysis, medical diagnostics, and pollution monitoring.

First awarded in 1839, the Rumford Prize is one of the oldest scientific prizes in the United States. The prize recognizes contributions to the fields of heat and light, broadly defined. Previous Rumford Prize recipients include Thomas Edison, in 1895, for his work in electric lighting; Edwin Land, in 1945, for his applications in polarized light and photography; Enrico Fermi, in 1953, for his studies of radiation theory and nuclear energy; and Sidney Drell, Sam Nunn, William Perry, and George Shultz, in 2008, for their collective efforts to reduce the global threat of nuclear weapons.

“On behalf of the American Academy, I am pleased to present the Rumford Prize to Dr. Capasso and Dr. Cho for their achievements,” said Jonathan F. Fanton, president of the American Academy of Arts and Sciences. “Along with Louis Agassiz, Alexander Graham Bell, Albert Einstein, Niels Bohr, and others, they are part of a distinguished lineage of scientists who have been academy members. We are proud to have highly accomplished scientists like Dr. Capasso and Dr. Cho as part of our membership.”

Capasso joined Harvard Paulson School in 2003 after 27 years at Bell Labs, where he was member of the technical staff, department head, and vice president for physical research. In addition to the American Academy of Arts and Sciences, he is a member of the National Academy of Sciences, the National Academy of Engineering, the Academia Europaea, and a foreign member of the Accademia dei Lincei (Lincean Academy). He has received numerous awards recognizing his achievements in nanoscale science and technology, which include the IEEE David Sarnoff Award in Electronics (1991), the Materials Research Society Medal (1995), the Wetherill Medal of the Franklin Institute (1997), the Rank Prize in Optoelectronics (1998), the Robert Wood Prize of the Optical Society of America (2001), the American Physical Society’s Arthur Schawlow Prize in Laser Science (2004), the IEEE Edison Medal (2004), the King Faisal International Prize for Science (2005), the Berthold Leibinger Zukunftspreis (2010), the Jan Czochralski Award for lifetime achievements in materials science (2011), the European Physical Society’s Prize for Applied Aspects of Quantum Electronics and Optics (2013), and the SPIE Gold Medal (2013).