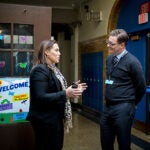 The oldest American university, Harvard has launched thousands of graduates who became important, trailblazing figures in politics, business, law, education, medicine, science, and the humanities. Some have made technological breakthroughs, developed innovative products, or discovered lifesaving treatments, while others have led nations and revolutions, created timeless artwork, or written words that changed the course of history.

But what do we know about the many thousands of present-day alumni who make valuable economic and social contributions after they leave Harvard, but who aren’t necessarily so well known? It turns out, not very much — until now.

According to the first University-wide survey examining Harvard’s global impact, alumni are deeply engaged with the world and strongly committed to contributing to society through entrepreneurship, board service, and volunteerism.

Thirty-nine percent of Harvard alumni have founded a for-profit or nonprofit venture, launching more than 146,000 companies and organizations operating in more than 150 countries. These enterprises account for 20.4 million jobs worldwide and generated nearly $3.9 trillion in revenue in 2014, according to the study.

While businesses naturally constitute a significant basis of activity, a third of the 146,000 ventures established by alumni are nonprofit.

The study found that nearly 31 percent of the for-profit entities started by alumni are in the fields of professional/scientific/technical services, followed by finance/insurance (13 percent), and media/information (8 percent). Nonprofit ventures tend to be in business/professional/labor/political industries (14 percent), followed by schools/universities/libraries (13 percent), and arts/humanities/cultural (12 percent).

Further details about the study, including comparisons by industry, age, and geography, are available online.

“The Harvard Impact Study captures the diverse contributions alumni make around the world,” said Harvard President Drew Faust. “Whether founding an organization or offering their time and talents to a nonprofit through board service or volunteerism, alumni around the world are working to better their local and global communities.”

Lending expertise to another organization is also popular. In all, alumni sit on nearly 300,000 boards, the study said, with 66 percent of alumni serving on either a for-profit or nonprofit board. Their participation is for the long haul: Alumni serve a median of six years on a board, while 35 percent say their board tenure clocks in at more than 10 years. And 72 percent of alumni currently on a board serve on nonprofit boards.

“There’s no doubt in my mind there would be no City Year if not for my experiences at Harvard, which ignited my passion for civic engagement and set me on a lifelong path helping to grow national service opportunities across the U.S.,” said Michael Brown ’83, J.D. ’88. Brown co-founded City Year, an urban public service corps for young adults.

In addition to shepherding their own careers, Harvard alumni give back. Nearly 116,000 non-founders, or 31 percent of alumni, dedicate a cumulative 1.6 million hours each month to volunteer efforts in their local communities, regions, or home countries. Both U.S. and international alumni say education is the area in which they most often volunteer, followed by a mix of human spirituality/religion, public governance/public service, and international humanitarian aid. The total hours volunteered by alumni each month is equivalent to 6,575 full-time jobs.

“The findings of the impact study reinforce Harvard’s longstanding ability to educate and train future leaders throughout the world,” said Paul Choi ’86, J.D. ’89, president of the Harvard Alumni Association (HAA). “I think if you’re an alum and you read the study’s results, you’re just really proud — proud to be associated with a community like this and proud that we have so many talented and accomplished people.”

The survey results affirm how alumni are a “fantastic resource for one another” and reinforce the value of HAA’s ongoing efforts to encourage alumni-to-alumni connections through its global network of Harvard clubs and shared-interest groups, the alumni directory, and new initiatives such as HAA’s public service forum, he said.

The New York City-based group offers an opportunity for representatives from nonprofits to meet Harvard alumni who are interested in serving on nonprofit boards. It’s been such a successful concept that HAA plans to expand to other cities around the world, he said.

Last summer, just over 10 percent of the 244,835 alumni with whom Harvard remains in touch took a 50-question survey conducted online by Market Strategies International, an opinion research firm that produced the final report. The University estimates there are a total of 375,000 alumni from all Schools living in 201 countries.

To make the survey less onerous to complete, the University partnered with LinkedIn so that those with accounts there could automatically fill out some questionnaire sections by simply uploading their profiles.

Josh Lerner, the Jacob H. Schiff Professor of Investment Banking at Harvard Business School and co-director of the National Bureau of Economic Research’s Productivity, Innovation and Entrepreneurship Program, helped shape the survey’s scope and questions so they would yield the best insights for future research. He also analyzed the results, which will become part of a new dataset about entrepreneurship.

“One of our goals is to create a database for faculty around the University — probably mostly for those in the social sciences, economists, and sociologists — so they can develop a comprehensive understanding of what Harvard graduates are doing over time,” said Lerner.

Future surveys may consider alumni involvement in other important areas, such as public service or the arts, he said.

“I think there’s a lot more that we will know.”