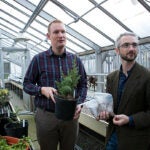 In 1962, President John F. Kennedy addressed a roomful of America’s Cup sailors, touching on the peculiar relationship humankind has with the sea.

“We have salt in our blood, in our sweat, in our tears. We are tied to the ocean. And when we go back to the sea, whether it is to sail or to watch it, we are going back from whence we came.”

Visitors to the new marine life gallery at the Harvard Museum of Natural History (HMNH) are greeted by that quote. And when they lift their eyes to look inside, they might almost hear the ocean’s swoosh. Almost.

The giant fish tank dominating the permanent exhibition is brought to life through skillful lighting. Inside the tank are some of the 282 different specimens of fish, mollusks, and invertebrates that populate the gallery, which opened last month.

Visitors stepping into the exhibit enter into the dark world off New England’s coast to learn about the evolution of fish, the phytoplankton base of the food web, the destruction and nascent recovery of oyster reefs off Cape Cod, and an undersea mountaintop 80 miles off Gloucester that teems with life and provides a refuge from modern fishing fleets.

“Marine Life in the Putnam Family Gallery,” three years in the making and part of an ongoing process of renovation and renewal at the museum, uses the seas off New England as a lens for learning about marine life around the world, said Janis Sacco, exhibitions director for HMNH’s parent museum, the Harvard Museums of Science & Culture (HMSC).

HMSC Executive Director Jane Pickering said that one of the greatest challenges in creating the new gallery was deciding what to put on display and what to leave out.

In order to highlight not just the breadth of the collections, but also the science behind them, the decision was made to include some “wet” specimens, Sacco said. The specimens, preserved in jars, are important, she said, partly for how they illuminate the ways scientists conduct comparative studies.

“You have to be courageous sometimes when picking [specimens]. … We show a lot of wet specimens, which was a deliberate choice. They show how things are preserved and stored, even when they don’t show their true beauty.”

MCZ Director James Hanken, a professor of biology and curator of herpetology, said the new gallery advances the museum’s long-term plan to modernize exhibits in both content and technology. It also celebrates the enduring tradition of marine science at Harvard, which began in the 1700s with William Dandridge Peck, the University’s first professor of natural history, who combed local fish markets for scientific specimens. In addition, Hanken said, the gallery provides a new way to connect the public to important issues facing the oceans.

“It enhances our ability to inform the public, and especially young people, about the marine environment and current threats to its existence,” Hanken said.

The renovation of the gallery was made possible by a donation from George Putnam III — a graduate of Harvard College, Harvard Law School, and Harvard Business School — and Kathy Putnam.