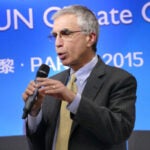 Mapping the road ahead for climate research

As negotiators make their way back to their home countries from the Paris climate talks, the world is taking stock of the agreement that many analysts describe as a landmark shift in global climate cooperation but some criticize as lacking mandatory targets to keep temperatures to a rise of less than 2 degrees Celsius above preindustrial levels.

To gain a greater understanding of the agreement, the Gazette spoke with Robert Stavins, the Albert Pratt Professor of Business and Government at the Harvard Kennedy School and head of the Harvard Project on Climate Agreements, who traveled to Paris and conducted briefings and side discussions for delegates from various nations.

GAZETTE: From your perspective, were the Paris talks a success or failure?

STAVINS: The Paris talks were absolutely a success in that the agreement that was achieved is one that meets all of the requirements of what would be a meaningful foundation for long-term action. But it’s only a foundation, so whether the agreement itself is ultimately successful, that’s something that can be judged only 10, 20, or even 30 years from now.

GAZETTE: You call it a foundation, but some scientists have gone on record calling it a fraud and saying it falls far short of action needed to reach the 2-degree-Celsius target to avoid serious global impact from climate change. Where do you think the difference in interpretation is there?

STAVINS: Can I answer that with a metaphor? You and I are walking down the street and we see a construction site. There’s a sign with an artist’s rendering: “70-story office tower going up on this site.” That’s pretty impressive, and so we walk over to get a closer look. We can see two stories of the 70 are already above ground level. But when we look down into the construction site, we are shocked to see that the foundation for this 70-story office tower is 10 feet by 10 feet. We know it’s going to collapse on itself — they’ll never be able to build to that height.

That’s the Kyoto Protocol, the current approach. Participating countries account for only 14 percent of global emissions: the European Union (EU) and New Zealand.

Under the new approach, you and I go back to the construction site. We look: The same sign is there for the 70-story office tower, but we don’t see the two floors. We look over the edge and discover that they’re constructing a new foundation, but now the foundation is not 10 feet by 10 feet, it’s a full square block. That’s a lot more meaningful than a two-story building that’s going to collapse and not go anywhere. This new foundation is what the Paris agreement provides.

It was absolutely impossible with the previous structure to make meaningful emissions reductions, because 100 percent of the growth in emissions is outside of the OECD countries — the wealthier countries of the world [in the Organization for Economic Co-operation and Development that are covered by the Kyoto accord]. The growth is the large emerging economies: China, India, Brazil, Korea, South Africa, Mexico, Indonesia.

So unlike the 14 percent of the Kyoto Protocol, there are now 186 countries that have submitted what are called “intended nationally determined contributions” (INDCs), and together they account for 96 percent of global emissions. That’s a dramatic change, and it is a necessary condition for meaningful progress. It’s not a sufficient condition; one also has to look at what the stringency is, of course. Now the stringency of even this very first step, I think, is remarkable, because the business-as-usual predictions of temperature increase by the end of the century without the Paris agreement were about 6 degrees [Celsius]. With the Paris agreement, if it’s fully implemented, even a conservative estimate would be 3.5 degrees [Celsius].

Is that more than the 2 degrees? Yes, it is, but it still represents a very significant bending of the emissions trajectory, and, more importantly, this is only the first step. Part of the Paris agreement is that every five years they revisit progress; there’s monitoring, reporting, verification, assessment. In this “stock-taking,” they compare the overall effects to the 2-degree target, and then countries submit new, more stringent INDCs. So it would be shortsighted to focus on the immediate temperature effects of what is a foundational agreement that establishes a system for progressively greater emissions reductions over time.

GAZETTE: What about the impact on the business community, and how important is the signaling to business and to everyone else?

STAVINS: There are signals to the business community and others in two ways. One way is that, for example, people listened to the radio this morning, and if you’re a CEO, then when you get to the office you might be likely to have a conversation about the possibility of carbon prices increasing. I don’t mean actually a carbon tax or cap-and-trade carbon allowance price, but simply a shadow price on carbon — it being more costly to use fossil fuels. That will be perceived to be more likely than it was the day before. That’s the direct effect.

The indirect effect, which is the more important one, is through domestic policy in the 186 countries that submitted INDCs. In the case of the United States, for example, the INDC target is a 26 to 28 percent reduction of carbon dioxide emissions below the 2005 level by the year 2025. That’s going to be achieved through a combination of federal actions: the Clean Power Plan in the electricity sector, CAFE standards — Corporate Average Fuel Economy standards on motor vehicles — appliance efficiency standards, California’s very ambitious climate policy, and the Northeast Regional Greenhouse Gas Initiative (RGGI). That’s how companies and individuals will really feel it. It’s the domestic policies used to implement the international agreement. The same is true in the EU, and the same is true in China. It’s through domestic policy actions that individuals and firms will feel the effects of the agreement.

GAZETTE: How comfortable are you that the voluntary nature of this agreement will actually result in meaningful change?

In the case of the Kyoto Protocol, which was binding under international law, when it got to the end of the first commitment period, 2008-2012, Canada recognized it was going to be very costly or difficult for it to comply, and if it didn’t comply, it would face a fine. So you know what it did? Canada withdrew; it dropped out. So the key binding law is not at the international level. Where these agreements bind is in domestic laws and regulations that themselves are binding under domestic law.

So in the United States, for example, if the automobile companies did not comply with the motor vehicle fuel-efficiency standards, they’re going to be fined and possibly find themselves in court. If the U.S. government itself does not follow through on the Clean Power Plan, it will be sued by green organizations. This is where the agreement’s provisions are not voluntary — in domestic laws and in regulations used to implement the deal in each country.

GAZETTE: What happens going forward? When is the next big conference?

STAVINS: One year from now in Marrakesh, Morocco. They happen every year, and during the year there are also meetings that take place, typically in Bonn.

The big work now is going to be implementation. In the Harvard Project on Climate Agreements we’re going to be working on a wide variety of research questions that come up in regard to how the Paris agreement is implemented. So, for example, something that we worked on a great deal — and I’m proud to say we had a significant part in — is Article 6 of the Paris agreement. That is where linkage comes in, the ability for countries to share their emissions-reductions responsibilities. There are many questions now of how that will be done, how that will be tracked, how double-counting will be avoided. So for us, it will be research on implementation. For the parties involved, it will be a whole series of decisions that will have to be made in order to implement.

STAVINS: I’ll give you an example of two cap-and-trade systems. Europe could say to the firms in Europe that, in addition to using one of the emissions allowances they get from the EU to comply, they can use an Australia allowance. If Australia says the same thing about European allowances to its firms, then we have a bilateral linkage. And if the allowance price was initially different in the two jurisdictions, which it inevitably is, firms would trade, and that would lead, if the market is robust enough, to a convergence of allowance prices, and cost-effectiveness is achieved.

GAZETTE: What would you say is the most vulnerable part of the U.S. carbon-reduction plan should the next president be hostile to the idea of fighting climate change?

STAVINS: The most vulnerable part is the Clean Power Plan, without a doubt. The CAFE standards on motor vehicles are already in place, are bipartisan, and were approved by Congress. The appliance efficiency standards are in place and are bipartisan. The California climate policy is important because that state is a large part of the U.S. economy. Both houses of the California legislature are controlled by Democrats, and the governor is a Democrat. Given demographic change in the state, that’s unlikely to change.

In regard to RGGI in the Northeast, these are among the most liberal states in the country, so they’re not going to reverse their policies. That leaves the federal Clean Power Plan under the Clean Air Act. It’s the only vulnerable component. It’s vulnerable to being invalidated through the courts. Several states’ attorneys general have sued the government, and are asking for a stay while lawsuits proceed in order to stop implementation. I don’t know if those will succeed.

But if the stays do not succeed and the lawsuits go forward, my view is that the next president — even a Republican — will not try to overturn the Clean Power Plan. I say this because the electric utilities are already planning how to comply. If the federal government then comes forward a few years from now and reverses course, that’s going to create stranded assets for those companies. The utilities will want it to go forward at that point. So I think it’s less threatened than commonly thought. That question about what a future Republican president would do with the U.S. policies to implement the INDC was the most frequent question I received when I spoke with delegations from other countries — Europeans, Chinese, everyone. They’re very aware of U.S. politics, and very concerned.

GAZETTE: How long do we have to get to standards that would limit the globe to a 2-degree increase? Do you think that will be a natural process, or at some point is it going to require a lot of pain?

The 2-degree target may be an important political target, but it is not a target that comes directly from the science, although most scientists seem to support it. There isn’t a bright line, a discontinuity in the damage function that occurs at that specific level. Nor does it come from economic analysis. Higher levels are worse, that’s clear, and there are probably increasing marginal damages at those higher levels. I’m not saying there isn’t urgency. It is important to be working as hard as we can right now.