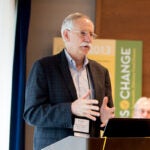 And that was just one trip.

Three times since August, scientists from the Arnold Arboretum have headed into the wild, trekking up mountains and through breathtaking valleys, avoiding wildfires and connecting with locals, all in an effort to track down biologically valuable plants before they vanish.

The expeditions — two in China by Curator of Living Collections Michael Dosmann and one in Idaho by Kyle Port, manager of plant records — are just the start. The Arboretum has launched a 10-year campaign to collect some 400 species of importance, with a focus on endangered plants that would strengthen the scientific value of the Arboretum’s living collections.

“One of the really important things we’re after are species on the brink of extinction,” said Arboretum Director William (Ned) Friedman, the Arnold Professor of Organismic and Evolutionary Biology. “Once a species is gone, it’s gone forever unless we can get it into a botanical garden. We’re being very targeted and trying to figure out what will have the highest impact.”

The Campaign for the Living Collections follows a four-year planning effort by a panel established by Friedman to consider what the Arboretum might look like 100 years from now, on a planet altered by climate change and botanically impoverished by human activity such as deforestation, pollution, overgrazing, and desertification.

The 10-year collecting effort — and a companion fundraising campaign — kicked off in August and early September, when Port and partners from Washington State University and the University of Idaho headed to the national and state forests of northern Idaho. The group managed to collect 60 specimens from 42 different species while dodging wildfires. Of these, 30 species are new to the Arboretum’s living collections.

Long days in the field were capped by nights at the hotel writing notes and preparing specimens to be shipped back to the Arboretum.

“You’re essentially discovering, documenting, and dreaming about plants all the while,” Port said.

On Sept. 1, the day before Port’s trip ended, Dosmann launched his own 18-day expedition, focused on the paperbark maple. The endangered tree, native to China and with distinctive peeling bark, exists in isolated populations scattered over thousands of miles around its former range.

Despite its rarity in the wild, the maple is a familiar sight to many American homeowners. More than a century ago, Arboretum plant explorer Ernest Henry Wilson made two separate collections, one for a nursery in England and the second for the Arboretum. From those introductions, horticulturists propagated trees that today are found in yards across North America and Europe. The genes of these landscape plants, however, hold just a fraction of the species’ diversity.

Dosmann teamed up with colleagues from the North America-China Plant Exploration Consortium. Together, they spent days driving to nine widely separated sites and then hiking for hours to remote, and occasionally not precisely known, locations. Locals proved to be invaluable guides in some cases, directing the team to stands that typically stood on mountainside slopes of between 50 and 60 degrees, where a misstep could send you tumbling down.

“We relied on meeting with local farmers; we’d describe a tree — it was a red needle in a green haystack. Numerous times [without their direction] we could have spent weeks looking and never found those 30 individuals,” Dosmann said.

After nearly a month in China, Dosmann returned to Boston with new paperbark maple specimens as well as seeds representing 10 species new to the Arboretum.

The campaign’s target of 400 species includes 150 new to the Arboretum. With an eye to climate change, some of the new collections will be of species adapted to warmer environments that would have had trouble surviving in Boston in the past, Friedman said.

Collectors will zero in on parts of a species’ range that share characteristics of the region — collecting from a cooler part of the range rather than a warmer part, for example — in the hope that specific populations will be better adapted to New England weather. Once in the Arboretum, specimens will be planted where they have the best chance to survive. Decades of experience have taught staff about microclimates — patches that tend to be warmer or cooler than the surrounding area — across the Arboretum’s 281 acres.

Another aim of the campaign is to upgrade the scientific value of current collections. That will entail filling gaps among key groups of plants, Friedman said, and adding depth to collections with specimens from different parts of a species’ range.

Collectors will also seek to provide replacements for poorly documented existing specimens. About 44 percent of the Arboretum’s specimens are both wild-collected and well-documented, making them extremely valuable for scientific study. Friedman said he’d like to see that figure rise to over half of the 15,000 specimens that cover the grounds.

The replacement process is also how the Arboretum will maintain its appearance, an important consideration since it was designed by famed landscape architect Frederick Law Olmsted.

“We will make decisions like any good museum about high-value [specimens]. While an art museum might put low-value artwork in storage, we’ll just pull it up and chip it,” Friedman said. “The feel of the Arboretum will be maintained in every way.”

The Arboretum won’t be going it alone in its collecting push. Between Wednesday meetings of his freshman seminar on Darwin, Friedman flew to Chengdu, China, for two days for a signing ceremony launching a three-way partnership between the Arboretum, the Chengdu Institute of Biology, and the Huanglong National Nature Reserve, which is a UNESCO Natural Heritage Site.

The agreement will foster collaborative fieldwork, collection, and propagation. The last inventory of the Huanglong area — a hotspot of biodiversity, with an estimated 1,250 species of higher plants in the reserve — was conducted about 50 years ago.

“I have every reason to believe that as we work with our partners there will be new species discovered,” said Friedman. “It’ll be extraordinarily exciting and, in just a few years, these plants will be growing on the grounds of the Arnold Arboretum.”

“What we’re looking for is a collaborative process to document biodiversity and celebrate the riches of beauty and biological breadth. We view the entire world as a collecting partner. … This was round one, a warm-up act. Just wait until next year.”