Where the orthodox and unorthodox meet 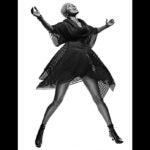 Alicia Jo Rabins stood looking at the girls in long skirts waiting outside the locked doors of her Barnard College dorm and wondered what was going on. It was a Saturday, Shabbat, and though Rabins was technically Jewish, she had been raised in a secular household in a Baltimore suburb, mostly clueless about her religious heritage.

“Finally, I asked one of the girls, and she said, ‘Oh, we don’t use electricity on Shabbat, so we’re waiting for someone to come through the doors first,’” since they were powered, remembered Rabins, a poet and musician who will speak and perform Monday at Harvard Hillel.

That dorm moment was one in a series of accidental exposures to orthodoxy. “It seemed so exotic, actually,” she said, “the idea that a rule from a spiritual tradition would be so detailed as to cause such a specific behavior. I was drawn to the idea of religious law as a sort of mindfulness practice.”

Rabins had always been fascinated by “the sacred,” a filmy and roving sense of holiness that she had pinned down in nature, and in brushes with Catholicism and James Joyce. “I had a pan-spiritual interest,” she said.

But still curious about those girls in long skirts, Rabins homed in on Judaism, showing up late for a Wednesday-night Torah study at Columbia University, where she was paired with an ultra-Orthodox girl of the same age.

“We would have these amazing conversations. I would be like ‘Do animals have souls?’ … these elementary-school questions, and she would be like, ‘Do you just have sex on a first date if you’re not religious?’ We had no idea about each other’s worlds, and it was an amazing way to encounter Jewish texts with someone who was also making this journey, but in a different direction.”

Rabins was well-versed in different directions. At age 3, her mother enrolled her in Suzuki method violin lessons, which Rabins loved though she eventually drifted away from the classical world to punk rock and folk music.

Exploring Judaism and differences further, after Barnard she enrolled in New York’s Jewish Theological Seminary, where for her thesis she composed a song cycle with lyrics about the lives of Biblical women. This sparked the formation of her current band, Girls in Trouble.

Along with music, there had always been poetry. Rabins earned an M.F.A. from Warren Wilson College, and her manuscript “Divinity School” was chosen by the poet C.D. Wright for the 2015 APR/Honickman First Book Prize.

The quotidian and the spiritual collide in Rabins’ work. A brief poem titled “How to Confess an Affair” reads like a cheeky extended haiku:

Details are fishhooks that will remain in the lip of the small fish
that lives inside your spouse and swims sometimes towards
you, sometimes away from you. If you love the fish, be careful.

In “Birth,” Rabins’ speaker is in labor:

Then the demons found me,
And one by one,
they placed their hands on my belly
and began to chant.

The newborn is a gift, but also a kind of terror: “And so it was that you were born, / little monster with my face.”

Now married and a mother of two, Rabins said that motherhood has broken her open: “It shows me strengths I didn’t know I had, weaknesses I didn’t know I had … it’s both revealing and psychedelic how far you can travel during one hour in a room with a 3-year-old.”

Rabins resides now in Portland, Ore., working as a Jewish educator, integrating art to help her students connect to Jewish texts. Along with Girls in Trouble, she occasionally tours with her one-woman chamber rock opera, “A Kaddish for Bernie Madoff,” and is hard at work on a second collection of poems.

Alicia Jo Rabins chats about her musical project, Girls In Trouble, which performs songs based on women of the Old Testament.

Luxuriating in both reverence and irreverence, the sacred and the profane, Rabins chose her book’s title as a gesture toward the place where concepts like divinity meet realities like school. “The center that the book found was the question of where everyday experience in the body meets spiritual truths and passed-down wisdom,” she said. “I don’t intend it to be a book that lives in the sky.”

Harvard’s Elisa New will introduce Alicia Jo Rabins, who will read from “Divinity School” and play with her band Girls in Trouble on Nov. 16 at 7 p.m. in Rosovsky Hall at Harvard Hillel, 52 Mount Auburn St. More information is available here.