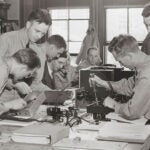 Architect Frank Gehry reflects on half a century of creating surprises

“Create buildings and places that engage people. It doesn’t mean pandering to historical models of the past,” Frank Gehry, the legendary architect, said of his guiding principles. “And question everything.”

Though long known as a boundary-pushing visionary in design circles, Gehry found mainstream celebrity in the late ’90s with the opening of the now-iconic Guggenheim Museum in Bilbao, Spain, a swirling, futuristic abstraction in stone, glass, and titanium. He’s since gone on to build many notable projects, including the Walt Disney Concert Hall and the MIT Stata Center.

With salty, dry wit, Gehry reflected on his still very active 50-year-plus career during a talk Friday evening at the JFK Jr. Forum hosted by the Institute of Politics at Harvard Kennedy School.

Deborah Borda, the president and chief executive officer of the Los Angeles Philharmonic who is now a Hauser Leader-in-Residence at HKS’s Center for Public Leadership, described the iconoclast as a man “who has almost single-handedly transformed the world of contemporary architecture.”

“He’s done it through artistry, technology, resilience, and something people don’t always think about but which is a critical factor about Frank, and that is: Humanity.”