The fading of polio 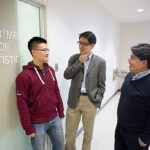 But there was also hope.

A decades-long campaign to make polio the second human disease eradicated — the first was smallpox — is tantalizingly close to achieving its goal.

The number of polio cases has fallen precipitously since the campaign started in 1988, from an estimated 350,000 to just 359 in 2014. And the numbers are down again this year. As of Nov. 4, just 51 cases of wild polio virus had been reported, compared with 277 at the same time last year, according to statistics from the Global Polio Eradication Initiative.

That long decline is thought to have saved 1.5 million lives and 13 million children from paralysis. Today, only two countries — Afghanistan and Pakistan — have wild polio virus circulating among their populations, according to the World Health Organization (WHO). In addition, of the three polio subtypes, type 2 was eradicated in 1999 and type 3 has not been seen in three years, raising hopes that it too may be gone.

Faculty members and students gathered at the Radcliffe Institute for Advanced Study on Monday for a panel discussion about the effort. Participants said that despite the progress already made, eliminating the last few cases will be no easy task. The challenge was highlighted by clips from the documentary “Every Last Child,” which tells the story of five people affected by polio in Pakistan and the difficulties they face, including the hostility that has even led to the murder of volunteer vaccination workers.

The panelists said that engagement by community leaders will be key to reaching those last cases. The CIA’s use of a vaccination campaign as a cover for efforts to identify terrorist Osama bin Laden a few years ago lent credence to the claims of vaccination opponents. That means that eliminating U.S. influences from the campaign might be important in Afghanistan and Pakistan. A campaign funded by Muslim nations with vaccines manufactured in Muslim countries might have more success, panelists said.

Local buy-in was key to the recent successful campaigns that appear to have eliminated polio from Nigeria, according to Obiageli Okafor, a Nigerian student at the Harvard T.H. Chan School of Public Health. The Nigerian campaign enlisted the aid of local emirs, one of whom vaccinated a grandchild on television, she said.

The event was hosted by Rifat Atun, professor of global health systems at the Harvard Chan School, who said that innovative thinking will be needed to reach those last unvaccinated populations. Held at the Knafel Center, the event featured a panel of students from Harvard Chan and the Harvard Kennedy School, as well as Atun, Senior Lecturer on Global Health Richard Cash, and Middlebury College Associate Professor Svea Closser.

Though some speakers said the CIA’s efforts to catch bin Laden damaged the campaign, Cash said resistance to vaccination predated that episode. The issue is not so much about health, he said, as it is about politics, and some groups are using opposition to the vaccination campaign to make a broader political point that has little to do with health, or polio specifically.

Closser said the effort is hampered by its one-disease design and that a general strengthening of health systems in the affected countries would make success easier. However, she said, one of the ancillary benefits of the campaign is that health workers are being forced to reach into hard-to-access areas that they otherwise might not visit. If those populations could be reached by an array of vaccines in addition to polio, “it could be an amazing accomplishment,” she said.

Panelists were divided over whether the effort would ultimately succeed, with Cash and Closser expressing pessimism, and Benjamin Ammon, a master’s in public health student at Harvard Chan, questioning the cost of the effort for an ailment whose impact, he said, pales compared with other diseases. Still, Ammon said, having come this far, the effort should be seen through, adding that success is expected to bring economic benefits, estimated by the WHO at between $40 billion and $50 billion over 20 years, mainly in developing countries.

Atun said he thought the goal was reachable through a systematic process of focusing on countries, then provinces, then communities, and sub-communities, then shifting from oral polio vaccine — which are cheap and effective, but which can cause polio in a small number of cases — to a safer injectable vaccine.

“We are very close. … Nigeria has shown it can be done,” Atun said.