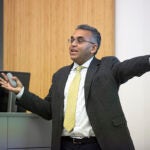 An indictment of Ebola response

In the mid-1980s, the U.S. Navy wanted deep-sea explorer Robert Ballard to launch a secret expedition to investigate two sunken subs, one of which still held nuclear weapons. Ballard agreed, telling them, “Have I got the perfect cover story.”

That “story” turned out to be the search for the Titanic, which Ballard found in 1985 with the help of deep-diving drones the Navy agreed to finance for the sub expedition.

The Titanic was the perfect cover story, Ballard said, because it was located between the wrecks of the U.S.S. Scorpion and the U.S.S. Thresher. The Navy let him search for the famed ocean liner only after the submarine mission was complete, which left him little time. Still, lessons from the sub search served him well. Instead of focusing on the Titanic itself, he looked for signs of the debris trail and, once found, followed it to the wreck.

The drones Ballard used heralded their widespread adoption — in water and air and on land — and also helped him in later notable discoveries, including the German battleship Bismark (1989), the U.S. aircraft carrier Yorktown (1998), and ancient marine archaeological finds in the Mediterranean and the Black Sea.

The continued development of undersea drones is the future of deep-sea exploration, Ballard said during a Harvard talk on Wednesday.

He shared an anecdote of a time when researchers aboard his ship, the E/V Nautilus — named after Jules Verne’s famed “Twenty Thousand Leagues Under the Sea” submarine — contacted Harvard microbiologist Peter Girguis on a plane at 35,000 feet. Within minutes, Girguis, a professor of organismic and evolutionary biology and an expert in the microbiology of the sea floor, was directing researchers himself, taking virtual charge of the operation.

That episode, Ballard said, contained a glimpse of a future in which dark, dangerous work once done by humans in deep-sea submersibles is instead carried out by robotic subs in constant communication with research vessels.

Scientists and technicians will increasingly use satellite communications to connect with colleagues around the world, transforming lonely descents to the deep into networked, high-speed, and — at least for those participating from home — even comfortable endeavors.

Ballard, director of the University of Rhode Island’s Center for Ocean Exploration and president of the nonprofit Ocean Exploration Trust, drew a standing room-only crowd of more than 300 to the Geological Lecture Hall. In his talk, sponsored by the Harvard Museum of Natural History, one of the Harvard Museums of Science and Culture, he returned to the roots of his love affair with the sea, notably an early reading of “Twenty Thousand Leagues” and a childhood move to San Diego.

Ballard also described his early submarine experience as a Navy officer, as well as decades exploring the sea floor and undersea hydrothermal vents, much of it via the submersible Alvin.

Such adventures take a back seat with scientific funders, Ballard said, drawing only 1/1,000 the support that space exploration does. That means, he said, that the surface of Mars is more familiar to scientists than that of our own planet. The mid-ocean ridges alone, mountain ranges that run around the planet “like the seams of a baseball,” cover some 23 percent of the Earth’s surface and are rich in ores like copper, lead, zinc, and gold, yet have drawn relatively little attention.

In fact, Ballard said, most of the planet is entirely unlike the world humans know. It is covered by ocean with an average depth of 13,000 feet, far below the depth that light can penetrate.

“Most of the Earth is in eternal darkness and will never feel the warmth of the sun,” Ballard said.

What the deep sea does absorb, however, is the warmth of the Earth, and Ballard described his role in discovering the abundant life around hydrothermal vents, whose rich chemical soup sustains tubeworms, giant clams, and other strange creatures.

Ballard said it was his long experience traveling to the ocean floor and back — days when his commute was 2½ hours each way for just three hours on the bottom — that made him look toward undersea drone development.

“[We were] trying to explore 72 percent of the planet at 1 knot,” Ballard said.

Today, his emphasis is on engaging a new generation of explorers and exposing kids to the wonders of science. The United States, he said, spends more than all but one other industrialized country on education, yet ranks 27th in education in STEM subjects — science, technology, engineering and math.

When he returned from the Titanic expedition, Ballard said, his desk was buried under letters from kids asking how they could grow up to do what he does. Since then, he said, he responds to such letters by telling the writers to apply themselves, always signing off “study hard.”

Currently Ballard is engaged in a re-creation of the 19th century Challenger exploration, during which the British ship traveled around the world, conducting dredges and trawls and discovering some 4,000 new species. So far, Ballard said, his Nautilus research ship has covered 10,000 miles, with six more months at sea planned for next year. Even at sea, despite the scientific demands of the moment, he makes time to answer questions from schoolchildren.

“I’m really excited about getting the next generation involved,” Ballard said. “Middle school is the battlefield.”