Flier to step down as Medical School dean 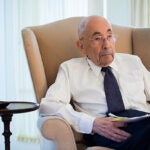 After nine years in post, he plans to return to teaching after a sabbatical year

Jeffrey S. Flier announced today that he will step down as dean of Harvard Medical School (HMS) in July. Flier, an endocrinologist and an authority on the molecular causes of obesity and diabetes, is the Caroline Shields Walker Professor of Medicine at HMS, and plans to return to teaching and regular service on the faculty following a sabbatical in 2016-17.

Flier became the 21st dean of HMS in 2007, implementing a broad-based, strategic planning process to produce a clear vision for a vital, collaborative academic community well positioned to advance biomedical research and medical education. Flier has overseen a series of innovative educational approaches, including the redesign of the School’s M.D. curriculum; strengthened the School’s research enterprise through new faculty appointments and initiatives; and guided the School’s continuing advancement through the 2008 financial crash and tightened federal funding for research.

“I have strived to work every day over these past eight years to sustain and enhance the sacred mission of this, the world’s leading medical school — set within the world’s greatest university — and associated with the finest teaching hospitals and research institutions anywhere,” said Flier. “Working together, this large, complex, and remarkable community has made great strides — as our mission statement promises — toward reduced suffering caused by disease.

“It has been an extraordinary honor and privilege — more than words can possibly convey — to have been given the opportunity to serve as dean,” Flier added.

“From the moment he accepted my invitation to serve as dean, Jeff has invested himself relentlessly in sustaining Harvard Medical School’s excellence and enhancing its extraordinary contributions to improving health,” said Harvard President Drew Faust in a message to the HMS community. “He has never wavered in his determination to assure that our remarkable community of medical faculty, students, and staff — on the Quad and across Harvard’s affiliated medical institutions — fulfill the aspiration to be one of the world’s most powerful forces for the advancement of biomedical science and the betterment of the human condition. In a domain energized by the interplay of scientific rigor, innovative thinking, and humane concern for others, Jeff has not only affirmed those qualities but embodied them.”

Flier’s leadership has been marked by efforts to develop far-reaching educational initiatives, advance the School’s record of remarkable achievement in scientific discovery, and safeguard the School’s financial stability. Flier has guided an innovative and extensive redesign of the HMS medical education curriculum, one that has involved hundreds of faculty over the course of several years. The Pathways curriculum more closely fuses basic science and clinical education, moving students into clinics earlier and employing more advanced pedagogical techniques and technology.

He has overseen the creation of an integrated program in graduate education (both Ph.D. and master’s) and the launch of several new master’s programs in priority areas that include global health delivery, bioethics, medical education, immunology, and biomedical informatics. Under his leadership, HMS has also formed a new Office for External Education, combining under one strategic umbrella the School’s Continuing Medical Education, Global Education, and new online education initiatives along with Harvard Health Publications, in order to make HMS’s educational offerings accessible to many kinds of learners around the world.

Flier is also recognized for his deep commitment to the research and discovery mission of Harvard Medical School.

Under his leadership, HMS last year successfully launched the Laboratory of Systems Pharmacology, the cornerstone of the transdepartmental Harvard Program in Therapeutic Science (HiTS), in which scientists, software engineers, and physicians are partnering to advance the science of drug discovery.

During Flier’s tenure as dean, he championed the establishment of an academic Department of Biomedical Informatics, focusing on the development of new tools and methods for capturing, representing, storing, and analyzing big biomedical data and information. He repositioned the Department of Global Health and Social Medicine to embrace a more ambitious mission in global health, and launched a Center for Primary Care that enables innovation and new models of patient care across a range of affiliated teaching practices that serve more than 270,000 patients in Greater Boston.

Also under his guidance, the Harvard Catalyst has created avenues for cross-disciplinary and translational research. It was awarded two successive five-year federal grants, making possible new efforts in collaborative biomedical research across Boston.

“Every single day, our students, faculty, and staff work together to enhance human health across the dimensions of education, research, and service,” said Flier. “These efforts are of increasing importance to the world today. Over the past eight years, I have encouraged this remarkable community to leverage their individual talents by working together in partnership, including new collaborations and modes of interaction.  It is my hope that these efforts have made the School a stronger place and resulted in meaningful contributions to biomedical science and health.”

Flier is one of the country’s leading investigators in the areas of obesity and diabetes. His research has produced major insights into the molecular mechanisms of insulin action and insulin resistance in human disease, and the molecular pathophysiology of obesity.

Born in New York City, he received a B.S. from City College of New York in 1968 and an M.D. from Mount Sinai School of Medicine in 1972, graduating with the Elster Award for highest academic standing. Following residency training in internal medicine at Mount Sinai Hospital from 1972 to 1974, he moved to the National Institutes of Health as a clinical associate. In 1978, he joined the HMS faculty of medicine, serving as chief of the diabetes unit at Beth Israel Hospital until 1990, when he was named chief of the hospital’s endocrine division.

In 2002, Flier was named chief academic officer of Beth Israel Medical Center (BIDMC), a new senior position responsible for research and academic programs. He worked with Beth Israel Deaconess academic department chairs to ensure the quality and breadth of academic programs at BIDMC, in which many HMS students take part. He also served as the BIDMC’s formal liaison to HMS, sitting on the School’s Council of Academic Deans.

Flier is the author or co-author of more than 200 scholarly papers and reviews. An elected member of the Institute of Medicine and a fellow of the American Academy of Arts and Sciences, he has been recognized with such honors as the Eli Lilly Award of the American Diabetes Association, the Berson Distinguished Lectureship Award of the American Physiological Society, and honorary doctorates from the University of Athens and the University of Edinburgh. He was the recipient of the 2003 Edwin B. Astwood Lecture Award from the Endocrine Society, and in 2005 he received the Banting Medal from the American Diabetes Association, its highest scientific honor.

Faust said that she and Provost Alan M. Garber will launch a search for a new dean soon.