Pedro, a pitcher with ‘no space to fail’ 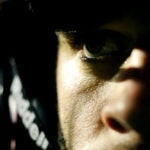 On the mound, he was a wily wizard ferociously staring down hulking batters as his pitches mercilessly blew past them. But off the field, he radiated pure joy, a playful prankster with the soul of a poet. Those confusing impulses seem impossibly contradictory unless your name is Pedro Martinez. And then it makes perfect sense.

The retired Boston Red Sox pitching great and now Baseball Hall of Famer toured Harvard before stopping by Sever Hall Tuesday evening for a lively conversation with Michael Sandel, the Anne T. and Robert M. Bass Professor of Government at the Faculty of Arts and Sciences, hosted by The Harvard Foundation.

The two touched on Martinez’s difficult road to the major leagues, during an era when performance-enhancing drugs were widely used. They discussed his family and faith, and some of the more memorable moments in his remarkable and improbable 18-year career, including his thoughts on being sent late into Game 7 of the 2004 American League Championship Series against the New York Yankees despite pitching on one day’s rest. (“That was shocking!” he joked. “I’m still asking for that answer from [then-manager Terry] Francona!”)

“Ever since I started, I had no space to fail,” Martinez said of growing up in Manoguayabo, Dominican Republic, in a tiny shack crowded with his parents, five siblings, and a few scattered chickens and cows, playing baseball in the yard with his brothers and cousins. While money was tight and food was scarce, his parents made it clear that hard work and determination were abundant and free.

The Red Sox retired Martinez’s uniform number 45 last fall at Fenway Park, and in July he became only the second Dominican player, after San Francisco Giants pitcher Juan Marichal in 1983, to be inducted into the National Baseball Hall of Fame in Cooperstown, N.Y. His bilingual acceptance speech was less a celebration of his own achievements than it was an expression of gratitude to be shared with all Dominicans.

“I would like you to actually see me as a sign of hope for a Third World country, for Latin America, someone that you can really look up to, and feel comfortable enough to say, ‘I’m proud of you,’ ” he told the crowd that day.

Despite the early success of his older brother Ramón, a starting pitcher for the Los Angeles Dodgers, Martinez said baseball scouts never projected that he’d amount to much because he was a small, skinny kid who didn’t look like the typical ballplayer. The anger he felt watching others with lesser skills — but who were bigger and stronger — being given the few available opportunities to do what he loved fueled a competitive fire and relentless desire to prove the skeptics wrong.

“I never said anything, I listened a lot. I kept it all in,” said Martinez. “Now I’m speaking openly about it, but back in those days, I just had to listen, swallow it, and bring it out competing.”

The slights cut deep, but the stakes were simply too high to let his true feelings show as a young player from the D.R.

“That piles up in your heart,” he said, “But as soon as you snap in one of those [baseball] academies, being from where I am, you’re out. You guys are disciplined here, very educated, but over there, there’s no other chance.”

Even after he made it to the “show” — first with the Dodgers, then the Montreal Expos, and later the Red Sox — Martinez’s drive never wavered. But it didn’t dampen his excitement and joy at finally having reached a lifelong goal.

Despite the many difficulties on the road to fame, Martinez said that in retrospect he wouldn’t have had it any other way.

“I became a lot wealthier than I was when I was in the shack, for sure, but I don’t know that I would trade my childhood for probably any other. My struggles, I don’t think I would give them away for anything,” he said. “My struggles made me appreciate every little success I had in my career.”