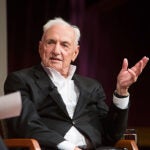 Panelists at the Kennedy School on Monday expressed optimism about the U.N. climate conference set to begin in Paris on Nov. 30, calling U.S. participation on the heels of domestic climate-related moves a “game-changer.” Still, they took care to point out that progress, not a solution, is the best-case scenario for the talks.

“There’s an opportunity now and there’s promise now that I have not experienced in the 20 years that I’ve been following … negotiations,” said Robert Stavins, the Albert Pratt Professor of Business and Government at the Harvard Kennedy School and head of the Harvard Project on Climate Agreements. “My view is that this is a very significant moment, both in the history of climate negotiations, but more importantly … in the history of seriously addressing global climate change.”

In addition to U.S. moves toward curbing carbon emissions, international attention on the issue is far more substantial than it was at the time of the 1997 Kyoto Protocol, according to panelists. That agreement covered just 14 percent of global carbon emissions, Stavins said. Countries responsible for 90 percent of today’s emissions have already committed to voluntary reductions in advance of the Paris talks.

“That is a breathtaking change from where we were,” Stavins said.

The high level of involvement sets the stage for an agreement to abide by those voluntary reductions — called “intended nationally determined contributions” (INDC) — and to establish a system in which progress is reported openly and monitored, and goals are revised at periodic meetings aimed at continually cutting emissions.

The panel came just days after Paris and the world were shaken by a terrorist attack that left 129 people dead. Introducing the event, Harvard President Drew Faust called for a moment of silence for the victims.

“The murder of hundreds of innocent people there, and in Beirut and in other atrocities in recent days represents an attack on universal values of human decency that bind the peoples of the world together,” Faust said. “In concert with millions around the globe we send our sympathy and our solidarity to all those affected.”

The event, which drew about 500 to the JFK Jr. Forum, was sponsored by the Office of the President and the Office of the Vice Provost for Research. In her introduction, Faust said that climate change is the “paramount challenge of our time.” She highlighted Harvard’s extensive research- and teaching-based efforts toward solutions, including 240 courses that examine some aspect of the issue and the 250 faculty members affiliated with the Harvard University Center for the Environment.

While panelists expect the talks to produce an INDC system, whether those commitments will be binding remains an open question. Binding contributions are supported by some nations, but not the United States, where such requirements would have to be approved by the Senate, which would likely reject them.

Bodansky pointed out that even non-binding international agreements have had success, citing the 1975 Helsinki Accords on human rights. In the case of INDCs, if the contributions turn out to be voluntary, even if the process of reporting and monitoring is mandatory, President Obama could treat them as an executive agreement, avoiding a showdown with Congress.

Davenport said that the U.S. presidential election promises to be a significant factor in the success of Paris. Republican candidates are largely opposed to climate legislation while Democratic front-runner Hillary Clinton has voiced support for continued action.

Meanwhile, a centerpiece of Obama’s domestic climate strategy — EPA regulations to cut carbon emissions from power plants — is under assault, both in the courts and in Congress. But even if the plan is overturned, it wouldn’t spell disaster for U.S. climate action, Stavins said. Other major initiatives would remain, such as fuel economy standards requiring automakers to increase mileage per gallon of gas, energy efficiency standards for home appliances, and important progress outside the federal government, such as action by California and a consortium of Northeastern states.

Optimism aside, consensus at the Paris talks would get the world only halfway to staving off the worst effects of climate change, Davenport said. And even with an agreement in place, the emissions of many developing nations will continue to climb.

India’s INDC, for example, Davenport said, allows its emissions to triple over time, though at a reduced rate. The country’s leaders, she said, are determined to expand electricity to millions of citizens, regardless of the environmental cost. One bright spot: India is talking with U.S. leaders about sharing clean energy technology to lower environmental costs.

More than a dozen protesters outside the event pushed for Harvard to divest its endowment from fossil fuel companies, waving signs and chanting. Inside, there were questions from the audience on the same topic.

The cultural force of actions such at the pope’s recent encyclical is more effective against denial than information by itself, Bodansky said. According to Stavins, the power of climate change denial may be overstated thanks to presidential contenders having to appeal to the more extreme elements of their party base.

“I think we overestimate how important denial is in the Republican Party,” he said.

Bringing the Global Community to the Table

An IOP panel discussion focused on a global approach to the environmental problems we face and how countries like China and India reconcile the urgency of climate change with their desire for economic growth. Video courtesy of Harvard Institute of Politics