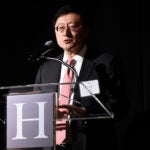 By Waverley He ’18 Harvard Correspondent

For 36 hours, 479 undergraduates from around the world gathered to develop groundbreaking products from scratch. The forum was Harvard’s first collegiate hackathon, aptly named HackHarvard.

The participants, who were selected from a pool of more than 3,700 applicants, came from not only top universities across the United States (including nearby Massachusetts Institute of Technology and Yale), but seven countries as well.

For Ajay Nathan ’18, the experience was rewarding because it allowed him to travel “from idea formation to completion in a short amount of time.” Nathan competed on a winning team with three other Harvard undergraduates.

Some competitors found it valuable to work with teams from different universities, a unique aspect of the Harvard-based event. HackHarvard also distinguished itself from other hackathons at peer universities by allowing students to compete in multidisciplinary categories, including international development, government, and finance.

Cameron Akker ’18, one of the organizers, noted that the diversity of participants reflected the diversity of these categories: Hackers ranged from freshmen still in their first computer science class to seniors with years of experience. By working with people passionate about fields other than pure computer science, hackers were able to apply technology to real-life problems in hospitals, banks, and government.

According to Akker, the main takeaway was not only coding, but also creating a community and experiencing “something greater that just makes you hungry for more” in the world of multidisciplinary technology.

Thirteen winning teams emerged from the scrum. Nathan’s group created an app, Prophit, that can make recommendations to customers about stores they might like to try based on their banking history, like “Netflix makes recommendations about movies you would like to watch.” The education category winner, Insight, used a virtual-reality viewer to simulate different types of vision, including color blindness. During the two-hour project fair on Nov. 15, the Insight team unintentionally helped someone discover that they were color-blind when they realized that the “normal” and “simulated” views looked the same.

The grand prize winner, Myo Explorer, showcased a robot explorer that can be manipulated by a gesture-controlled armband and streamed video footage in order to record its journey.

Kevin Leung of Rutgers University, a firefighter and EMT of six years, said that he and his teammates built their app, FireFighter_Monitoring, to combine his passions of technology and first response. The app, which won grand prize runner-up, uses a smart watch to send firefighter vitals to the chief, who can then send an evacuation signal to firefighters in danger.

“Firefighters are so focused on getting their task[s] done and rescuing victims that they sometimes do not remember to check their own well-being … [FireFighter_Monitoring helps] officers on the outside know how their crews are doing on the inside,” Leung said. In future implementations, his team hopes to integrate firefighter position tracking, which would enable rescue missions that could potentially save the lives of many first responders.

Waverley He ’18 was one of the organizers of HackHarvard.