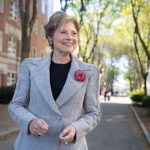 A voice for creative leadership

We live in a hybrid universe, says Paola Antonelli, and we must learn to think in ways that encompass its many parts. Antonelli, senior curator of architecture and design and director of R&D at the Museum of Modern Art, New York, describes a world we navigate using both our feet and our iPhones, fusing the digital and the analog in ways that would have been inconceivable only a few decades before.

But the cross-disciplinary approach that may seem natural for tackling this contemporary world is rife with challenges and problems of its own. Such sweeping thinking and creating is the topic of “Hybrid: The Space In Between,” a salon discussion that Antonelli will lead on Tuesday from 6:30­ to 8 p.m. at Piper Auditorium, Gund Hall, in the Graduate School of Design (GSD).

This salon follows the model of 16 previous discussions led by Antonelli at MoMA. The topic, she says, is a natural one for her. “I’m not a cognitive scientist, but I am a design person, an architect trained in a discipline that is by definition cross-disciplinary.

“Designers, if they are good, are masters of synthesis and are very knowledgeable in team building,” said Antonelli. She explained how designers “tackle different issues every time they tackle something new,” whether it be a digital interface that needs to fulfill multiple functions or an interior that has to provide shelter and also address occupants’ needs. To meet these needs, she explained, the designer has to pull together professionals with wildly divergent areas of expertise. “They always have to build teams in order to get to the specific kind of knowledges that they need,” she said.

At times, cross-disciplinary thinking can result in fresh approaches to old problems, such as what happened in Medellin, Colombia, when new ideas took on an entrenched social problem. Medellin, in the Aburrá Valley, was originally a divided city. Most of the development — and jobs — were in the valley. But most of the working people lived up on the hillsides, which were too steep for quick or easy navigation. (An average commute took more than two hours a day.)

It took a relative outsider, Mayor Sergio Fajardo Valderrama, to come up with a solution. A mathematician rather than a career politician (with a Ph.D. from the University of Wisconsin), Valderrama recognized that the shortest distance between two points would be a straight line, rather than a circuitous bus route. So why not cut straight up the mountain? Funiculars — suspended from cables — have been making such straight-line journeys up ski slopes for decades. But Medellin’s version, the Metrocable, is the first such system in the world dedicated to public transportation. Opened in 2004, it has both lowered crime rates in the uphill barrio and increased the ease and availability of employment for barrio residents.

It took courage for the city council to think outside the box and implement the funicular. “If they had any sense of the political problems, they wouldn’t have done this,” said Antonelli.

Of course, there are downsides to cross-disciplinary thinking, warned Antonelli, who describes such an approach as T-shaped. The challenge is that the crossbar of the T, breadth or generalization, can come at the expense of the vertical, deep and extensive knowledge of the subject, said the curator.

Her temporary relocation to Cambridge is in part an answer to this challenge. This fall, Antonelli is teaching “States of Design: The Present and the Future of the Field in Twelve Parts” at the GSD. She is enjoying this “little sabbatical,” as she calls it, because of the opportunity to not only teach but also to research.

“I realize I sometimes spend a little too much time on the horizontal [breadth] and not enough on the vertical [depth],” she said. “We all have a sense at times of feeling a little spread thin — of asking, do we have enough time to go deeper?”

Paola Antonelli will lead a salon discussion on Tuesday from 6:30­ to 8 p.m. at Piper Auditorium, Gund Hall, Harvard Graduate School of Design.