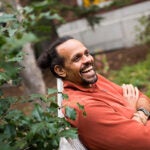 We live in a dabbling age, when Internet access makes instant experts of us all and crossing genres has become more expectation than exception. Yet, even now, when breadth appears more valued than depth, disciplines persist in the academic world.

Delivering the second Provostial Lecture of the Mahindra Humanities Center at Menschel Hall on Tuesday, University Provost Alan Garber ’76 made a compelling case for the continuation of this tradition, in academia, careers, and beyond.

Opening his talk with an acknowledgement of the faculty and scholars who make up the University, Garber addressed the current state of academia. More than simply “-ists” — biologists, sociologists, scientists, or even artists — he described a world of dedicated scholars. “The modern research university is the world’s — and history’s — greatest collection of specialists in the diversity of human knowledge,” he said. What unites these scholars, he said, are “certain overarching principles, doctrines, and beliefs.” In short, an appreciation for academic disciplines.

Explaining that he sought to explore both “the pressures facing traditional disciplines and the reasons for their longevity,” he began with a problem. How does one define disciplines? And what is their ongoing purpose in modern academia?

Garber used his own life to illustrate how a discipline is found and followed. Originally set on medicine, the provost discovered his love for economics when he, along with “about 900 other students,” took the introductory course Ec10.

“Economists grappled with big questions, and that intrigued me, so I decided to take more courses in the field,” he recalled, which led to being engaged by “the rigorous methods and sometimes combative debates that characterized the field at Harvard.” Ultimately, the provost would obtain both a Ph.D. in economics from Harvard and an M.D. from Stanford, to serve as Mallinckrodt Professor of Health Care Policy at Harvard Medical School and as a professor of economics in the Harvard Kennedy School of Government.

The progress of disciplines themselves has been marked by digressions and detours. Classics, once the standard, fell out of favor in the early 20th century, replaced by interest in economics, history, and government. More recently, changes in student demand have drawn off enrollment even in Ec10. And while Harvard has shown some immunity to the pull of pre-professional curricula, the effect of career concerns can be seen in the growth of interest in engineering and computer science classes.

“It’s not only about the students,” said Garber. The role of government and other outside groups also change and challenge disciplines. Not only do these external interests often affect funding — through grants and fellowships, as well as career possibilities — but political winds can blow hot or cold. Garber cited the 2011 statement by the governor of Florida that the humanities do not prepare college graduates for attractive jobs, steering interest — and funding — away from these disciplines, despite a report by the American Academy of Arts and Sciences that national spending for humanities research already equaled only a little more than 0.5 percent of the amount dedicated to science and engineering research and development.

Garber’s broad experience both within and beyond one chosen field has brought him around to his conclusion about why disciplines do — and should — persist.

First, he noted, is that disciplines are necessary for teaching. Second, the specialized approach of a discipline is a requirement for research, even if that research then contributes to interdisciplinary work. Third, he said, disciplines persist because they evolve, incorporating new discoveries and developing approaches to their areas of specialty and the world. Fourth, disciplines confer legitimacy. “Departments have been accused of orthodoxy and narrow parochialism, but faculty trained in a particular discipline are best-equipped to judge the significance of the research contributions of another researcher in their field,” he said.

While concern about disciplines is ongoing — “the alternative is complacency” — the provost sees the tradition as a vibrant one.

“Disciplines are at the heart of the University, and they play unique roles,” said Garber. “They rarely disappear — they are too firmly embedded to do so — but they continuously evolve.”