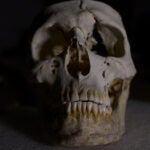 High-voltage laboratory played an instrumental role in both world wars

In June 1917, barely two months after the United States entered World War I, officers at Boston’s Charlestown Navy Yard realized they had an urgent problem. With its fleet of battleships bound for war-torn Western Europe, the U.S. Navy needed to recruit more than 2,000 radio and telegraph operators to help ships communicate across enemy lines.

Harvard’s Cruft High Tension Laboratory, which had been constructed two years earlier with a $50,000 gift from Harriet Cruft, was called into service. Harriet Cruft, who had inherited more than $1 million from her father, a prominent Boston merchant, donated the funds in honor of her four brothers, all Harvard graduates. To help the Navy meet the wartime demand for communications officers, Harvard President Abbott Lawrence Lowell offered free use of the new laboratory.

The massive number of Navy recruits quickly overran the laboratory, and they spread into residence halls, academic buildings, and temporary trailers around the present-day John A. Paulson School of Engineering and Applied Sciences campus on Oxford Street, Cambridge.

In addition to its service as training ground for naval radio operators, the Cruft Laboratory was also the site of radiotelegraphy research. Pierce and other faculty and staff worked alongside Navy researchers to develop wireless controls for torpedoes and a submarine sound detection system to aid coastal defense.

When the war ended, in November 1918, the Navy School for Radio Electricians was dissolved, but Pierce drew on the school’s success to launch a new, leading-edge program in electrical communication engineering.

Less than a quarter-century later, the United States was back at war and the Cruft Laboratory was again serving the military.

By the early 1940s, the Cruft Laboratory had become a major acoustics research center, due to the pioneering work of faculty member Frederick Hunt, M.S. ’28, Ph.D. ’33. Hunt and Phillip Morse, a professor at the Massachusetts Institute of Technology (MIT), launched an underwater sound laboratory at the Cruft building in the summer of 1941. After the U.S. entered the World War II, Navy officials partnered with Hunt and his team to develop a torpedo that used acoustic technology to navigate toward an underwater submarine. During the war, their research led to a number of advances in underwater acoustics and contributed to the development of sonar.

In addition to offering research facilities, the Cruft Laboratory helped fulfill an urgent call to train soldiers. Shortly after World War II began, the U.S. Army contacted Harvard administrators for help training 100 officers in the use of electronic communications systems. That initial course quickly expanded, and the laboratory building was soon a training ground for officers from all branches of the military.

With such high demand, the teaching staff was bolstered with engineering instructors from many other institutions. There was such an urgent need for military electronics training that courses were offered all day and night — the classrooms and lab space in the Cruft Laboratory were never empty. Over the course of the World War II, Harvard provided training for 6,254 military officers who served in Europe and the Pacific. 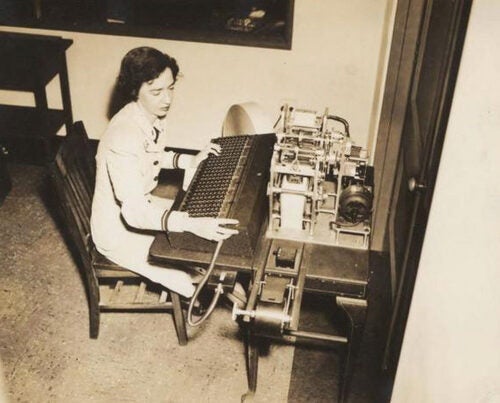 While at Harvard, she deftly programmed Mark I, proving its versatility, author Walter Isaacson recounts

While the military training academy was churning out new recruits, the laboratory became host to another famous wartime tenant — the Mark I computer. Howard Aiken, Ph.D. ’37, and Grace Hopper assembled the first electromechanical computer (formally called the “automatic sequence controlled calculator”) in the basement of the Cruft Laboratory in 1944. During World War II, the Mark I computer was used by the Navy to solve complex mathematical problems. The computer was also utilized by physicist John von Neumann during the Manhattan Project to calculate the potential effects of imploding the first atomic bomb.