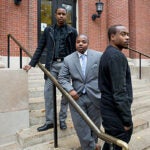 Words have power. Among the most potent words of recent years is the phrase “Black lives matter.” In July 2013, after the acquittal of the Neighborhood Watch volunteer who fatally shot Trayvon Martin, an unarmed black teenager, community organizer Alicia Garza posted a Facebook message proclaiming, “Black lives matter.”

The phrase went viral via social media and spawned a movement.

Garza is co-founder of Black Lives Matter (BLM), a global network dedicated to combating “anti-black racism” as it works to facilitate connections to encourage social action and engagement. She is also an author and the special projects director for the National Domestic Workers Alliance.

Garza delivered the keynote lecture Friday at the Memorial Church before an audience of 800. Joining the PBHA as co-sponsors of the event were 16 other Harvard student organizations and the Boston and Cambridge chapters of Black Lives Matter.

Citing the mission of Harvard to develop citizen leaders, Rakesh Khurana, Danoff Dean of Harvard College, presented Garza with the award and praised her for fostering “a more compassionate and humane society.”

Her hair in long braids and wearing jeans and boots, Garza ascended the church’s steep wooden pulpit and quickly created an intimate rapport with the audience.

Smiling at Coles, who was seated in the front row, Garza said, “It is an honor to receive this award in your name and an honor to be sharing this space with you.”

At times Garza’s speech moved with the cadences of a traditional African-American church sermon. She repeated stirring phrases and punctuated these refrains with a pause. The audience frequently responded with currents of snapping fingers.

Garza began by dedicating the award to the BLM network and the people “still fighting for humanity and dignity” in Ferguson, Mo., Baltimore, and Cleveland, cities where police have killed black youth. Their sons “became our ancestors way too soon,” said Garza, who then recited the names of 29 victims of racial violence. She concluded her litany with a long moment of silence.

Garza recalled the intense rage and grief she and her friends felt when they learned that George Zimmerman, the man who shot Trayvon Martin, had been acquitted of all charges. Garza said, “We were in shock. I felt it was necessary to make an intervention, and say that our lives do matter.”

Garza described her Facebook message as “a love letter to our people” and “a call to action.”

“By asserting the dignity and humanity of black lives,” said Garza, “we also acknowledge that everyone else’s life matters too.”

The BLM movement is striving to create “something new,” said Garza, “a regenerative, resilient society that allows us to live complex lives and celebrate complexity rather than punishing it.”

Responding to audience questions about building and sharing power, Garza said, “You can’t sit on the sidelines. Growth is hard. But focus on something bigger than yourself. Connect every day with it even if it’s not yet in front of you.”

Intended to celebrate and inspire such activism, the event kicked off PBHA’s annual Alumni Weekend and Call of Service Week. This year, PBHA wraps up the week with the Nov. 6 opening of Y2Y Harvard Square, what’s being called the nation’s first student-run homeless shelter for youth.

Concluding the evening with a benediction, the Kuumba Singers of Harvard College performed four spirituals, including the Civil Rights anthem, “Lift Every Voice and Sing.”